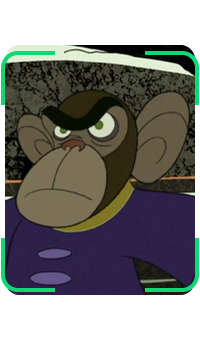 Yono is a highly powerful monkey sorcerer/martial artist from the Disney animated television series, Kim Possible. He is one of Oberon's Anti-Acolytes in the second Disney Vs Non Disney Villains War.

Yono travels to Bald Mountain with the rest of the Anti-Acolytes to put a stop to the Acolytes' plan to raise Chernabog from Hell. After one of the Acolytes, Daolon Wong, injures Yono's comrade, Puck, Yono takes on the enemy sorcerer. Wong summons three evil demonic henchmen to take Yono down; one of them manages to strike Yono with a hammer. However, Yono manages to disarm them quickly. This provides the recovered Puck the opportunity to stun them. With his enemies incapacitate, Yono annihilates his foes.

Relaxing in a pub, after the war becomes a new, Yono finds himself threatend, when Skulker, an emissary of Aku, makes an adverisemnt to the hunters, residing in the pub, tasking them to kill Yono, promising them a massive reward. Despite their efforts, Yono easily takes out the Bounty Hunters, one by one. When Aku steps in to finish the job, Yono transforms into a massive stone gollem. However, his latest action was his undoing, as Aku destroys the stone gollem, with a single blast, eliminating Yono in the process.