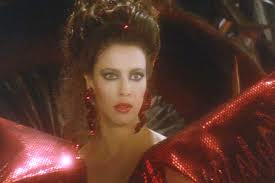 Xayide, often called The Emptiness, is the main antagonist of the fantasy film, The Neverending Story II: The Next Chapter. A sorceress with the capacity to conjure up nearly anything, she is a minor player in the second Disney Vs Non Disney Villains War.

General Kael approaches Xayide, requesting that she eliminate Princess Mombi on behalf of Queen Bavmorda. But Xayide recognizes Kael's true intentions: he wants the location of the child destined to kill Bavmorda. She thus travels to Mombi's fortress accompanied by her crustacean guards. The guards eliminate the Wheelers surrounding the fortress, but Xayide must walk through Mombi's corridor of severed heads. Xayide is unintimidated, finding Mombi's head located at the end of the corridor. As Mombi's body searches for its head, Xayide carries the head to Bavmorda.

Mombi reveals that Kal, the only being capable of destroying Bavmorda, is in league with the Morganians. The information comes not a moment too soon; the Morganians launch an assult on Nockmaar within days. Xayide summons a few crustacean henchmen to take down the British troopers hired by the Morganians, but their muskets quickly destroy the minions. Xayide then encounters one of the chief Morganians, Winnie Sanderson. Though Xayide is able to knock Winnie off her broom, she is helpless as Winnie transforms her into pure energy, killing her.

Retrieved from "https://villainstournament.fandom.com/wiki/Xayide?oldid=98019"
Community content is available under CC-BY-SA unless otherwise noted.