Start a Wiki
Woundwort´s Rabbits are the secondary villains of the movie adaptation and TV series, Watership Down. A group of lethal killer rabbits, who serve the will of General Woundwort, the Rabbits appear as secondary players in the Non-Disney Villains Tournament and Heroes vs. Villains War.

When Scarface invades Woundwort's territory, in Efrafa, he comes across Vervain, a lieutenant of Woundwort. Before he would attack the defensless rabbit, Scarface gets attacked by Woundwort, who stands up for Vervain. While the two class, Vervain gets in their way, attempting to save his master, by hitting Scarface with a pinecone. However, he is killed by the fox killer. Woundwort avenges his fallen comrade, by killing Scarface.

Defeat at the Animal Farm

After being informed that Napoleon sent the assassin, Scarface, on them, Woundwort gathers his remain army of rabbits, in order to get a payback. He sends his rabbits on the loose, encountering the Animals of the Animal Farm in the process. Despite their efforts, they are easily taken out by Benjamin, Snowball. Another group of rabbits look on, as a dog tears up every rabbit, he would encounter. As for Woundwort, he recieves a tragic twist, as he falls from the edge of a cliff to his apparent demise. 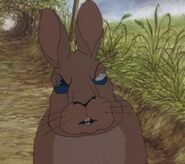 General Woundwort (Leader of the Efrafa Warren, slain in the Battle of the Animal Farm)

Vervain (The incarnation from the television series, former Lieutenant, slain by Scarface)
Add a photo to this gallery

General Woundwort (Leader of the his own rabbits, slain in the Battle of the outskirts of Castle Grimhilde) 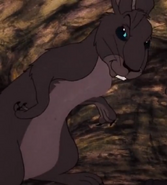 Vervain (The incarnation from the animated film, former Lieutenant, fate unknown of him) 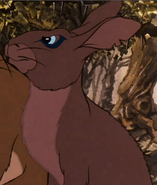 Captain Campion (former lieutenant, fate unknown of him)
Add a photo to this gallery
Retrieved from "https://villainstournament.fandom.com/wiki/Woundwort%27s_Rabbits?oldid=113975"
Community content is available under CC-BY-SA unless otherwise noted.