Walker is a secondary antagonist of the Nickelodeon animated television series, Danny Phantom. A vigilante ghost criminal hunter, Walker is a minor player in the second Disney Vs Non Disney Villains War.

Walker's vigilante-ism proves a threat to the alliance of David Xanatos. Duff Killigan is sent to terminate the ghost before he can cause greater damage. Though Killigan's explosive golf balls defeat Walker's ghost guards and even stun him, the ghost is able to retaliate. A bolt of ectoplasm melts Killigan's golf clubs, forcing the golfer to re-stock on weaponry. Killigan stuns Walker yet again with an explosive golf ball, but he only manages to destroy Walker's hat. Enraged, Walker blasts Killigan with a shot of ectoplasm, putting the golfing villain out of commission.

Later, Walker gets visited by Tzekel Kan, in his ghost prison. The priest manages to overpower the demon ghost and frees a criminal ghost-hunter, named Samhain, for the reason to recruit him into Eris' services. Walker is not seen in the later events of the war. 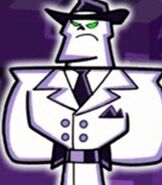 Add a photo to this gallery
Retrieved from "https://villainstournament.fandom.com/wiki/Walker?oldid=69827"
Community content is available under CC-BY-SA unless otherwise noted.