The Triumvirate of Terror is a terrorrist faction, consisted by dark and powerfull creatures, across the globe. The faction plays a significant role in Non-Disney Villains Tournament.

The Formality of the Faction

Contacted by Nox, Nergal, Him and Discord assemble at Nox's clocktower. There, Nox explains that he needs them for the purpose to reverse the flow of time, thus he forms the society, the Triumvirate of Terror, to start their quest.

Infinitrating the Legion of Darkness' Headquarters

Hearing of the mystic power, that the Digimon DNA wields upon the universe, Nergal and his team set off to steal that DNA, hoping that it's powers would be useful for Nox's research. However, they have to take it from Myotismon's hands, who is also one of the leaders of the Legion of Darkness. Nergal then stuns the vampire with his tentacles and some energy blasts, though Myotismon survives. Discord then fires energy waves at Myotismon, only to be blocked by Myotismon's shield. Myotismon the knocks off Nergal leaving him unconscious for the time being. Him then emerges, as he, along with Discord, fire energy blasts at the vampire, eventually crashing him through a building. At the same time Nergal recovers, but before they would rejoy their victory, a miraculusly Myotismon emerges from the remains, much to the shock of the trio. Frightended, the trio teleport away, rather than risking their lives to deal with the vampire.

In the meantime, the Triumvirate of Terror stalks Red, the Hell Cat. Once they surround him in an isolated place, they attempt to recruit him into their faction. Even more, Discord hypnotizes the demon, unleashing his feral side, while Him teleports his comrades into a large city. There, the Triumvirate of Terror and Red unleash chaos and destruction in the twon, killing and torturing many citizens, including the irritable farmer, Eustace Bagge.

While Nergal was satisfied with their recently actions, Him and Discord have different opinions, as they seek to exploit Nergal, by releasing an old "friend" from his prison, the Cathulhu Monster. Despite his new recruit, Nergar suffers a great loss, as he learns of his son's disappearance. This outraged Nergal, who in the process, promotes to challenge anyone, if that would help to find his son.

Speculating of the Legion of Darkness' recent actions, the Triumvirate of Terror travels to the haunted castle of Vampyro, an Acolyte of Myotismon. Even though, the vampire star uses some of his powers to kill his foes, the Triumvirate of Terror prove much for Vampyro, as they humiliate him in every way. Angered of losing, Vampyro calls upon one of his ghostly figures, Lewis, to deal with the trio. Lewis manages to stun Discord, temporary knocking him off. However, Lewis stops his attack, when Nergal exposes his true feelings about the loss of his family to Lewis; a loss that Lewis sufferer too. The outraged Vampyro then shatters Lewis' heart, only to his mistake, that Lewis turns against him and kill him in his fury. Lewis then reveals that he once had a family, before he would end up killed and become a ghost. Upon finishing his story, Lewis fades away, since his master cannot control him anymore. 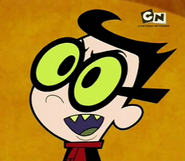