Toffee is the "Big Bad" of the Disney's television series Star vs. the Forces of Evil. A Septarian warlord, Toffee served as a former henchman of the extraterrestial king Ludo before discarding him to serve his own goals; additionally, he manipulated the king through his living consiousness to further his own schemes, eventually possessing his body. A brilliant tactician and schemer, Toffee thrives in manipulating others. He is a major player in Cartoon Villains War and the second Disney Heroes vs. Villains.

Meanwhile, the Septarian mastermind, Toffee, heard that the leader of the magical-creature hunting Huntsclan, the Huntsman, was planning on making him his next target. Resolving to strike first, Toffee met with his ally, Ludo, and tasked him with eliminating the Huntsman before he could come after him. Ludo agreed.

Back at Ludo’s castle, Toffee quickly learned of Ludo's failure, as he was confronted by the Huntsman and Huntsgirl, who had followed Ludo back to Toffee. The Huntsgirl attacked first, punching straight through Toffee’s chest. However, much to her surprise, the lizard managed to quickly heal the wound. Shocked, the Huntsman used his staff to slice off Toffee's arm, which he also regenerated. The Huntsgirl then attacked again, but Toffee easily held off her attacks. As the Huntsman attempted one last attack, Toffee chose to show him just how strong he really was, slapping the Huntsman aside hard enough to send him flying through a wall. Seeing her master defeated, the Huntsgirl reluctantly abandoned her quarry and followed after him, as Toffee coldly taunted her.

Meanwhile, Toffee took the next step in his plans by forging a deadly alliance with the evil goddess Mirage.

Mirage, seeking to increase her and Toffee's power, decided to hunt down a group of magical creatures known as Smurfs and harvest their magic energy for herself.

His wish for killing Duke Ightor

The rogue war lord Duke Igthorn had succeeded in assembling an army of Ogres, and set out to win the war by conquering kingdoms and territories throughout the land. This grab for power did not go unnoticed by Toffee, who feared that the duke could prove to be an annoyance and sought to get rid of him before he could become a threat. Ludo, eager to prove himself after his previous defeat, volunteered to deal with him. Seeing that he wouldn't lose much whether or not Ludo failed, Toffee agreed.

Needing more firepower for their conflict with the Beast, No Heart and Gargamel ally with Duke Igthorn. However, No Heart is more interested in Igthorn’s formidable army of ogres, and quickly grows annoyed by the Duke. Fortunately, he receives a visit from Toffee, who suggests a way to get rid of the arrogant duke.

Having enough of Ludo

Tired of Ludo’s incompetence, Toffee decides to give him one last chance to redeem himself for his previous failures. He sends him to eliminate a mad school teacher named Denzel Crocker, who has recently acquired a fairy godparent.

As punishment for his failure, Toffee expels Ludo from his alliance, taking his castle and his monsters in the process.

Toffee hires the ruthless pirate Bloth to replace Ludo as the leader of his monsters. However, Bloth's leadership of his new crew does not go unchallenged, as Bloth’s first mate, James Hook, instigates a mutiny against him.

Wanting to make her presence in the war known, Princess Morbucks visits Toffee, demanding that he find her an opponent to battle. Toffee selects the recently freed Nightmare Moon, and Morbucks sets out to confront her at her castle. Although Princess’s arsenal is formidable, the mare of the moon is more than prepared to deal with her.

Meanwhile, Toffee and Mirage call together their allies and plan their next move.

Toffee meets with Mirage to personally strike against their next target, Nightmare Moon. Having gained all the information they need on her by watching her fight Princess Morbucks, Mirage and Toffee are ready for whatever the former princess can throw at them, but Nightmare Moon is still a powerful foe. However,they both manage to defeat her.

Making a deal with Shadow Beast

Meanwhile, Toffee pays a visit to the Beast, offering an alliance as well as resurrection should he fall in battle. The Beast, with his forces significantly weakened by the loss of the changelings, accepts Toffee's support. In exchange, Toffee asks him to hide something very important to him.

Meanwhile, without the knowledge of Mirage or Skullmaster, Toffee has Bloth obtain a certain magical artifact for him. Toffee then uses this artifact to summon a rather peculiar being to his side.

With the fairy trickster Puck now enslaved to his will, Toffee gives him his first task: retrieve an amulet known as the Phoenix Gate. The only problem? The gate is currently in the hands of Mozenrath, who is studying it to unlock it’s power.

Puck delivers the Phoenix Gate to Toffee, who succeeds in unlocking it’s abilities and prepares to use it to gain ultimate power.

Contrary to what Skeletor believed, the Crystal Of Souls was not actually destroyed in the battle, and merely expelled most of it’s energy, as Toffee, searching through the wreckage of Skullmaster’s lair, recovers the crystal and merges it with the Phoenix Gate, creating an object of unlimited power. With this object, Toffee is ready to proceed with the final phase of his plan.

With only one loose end left to tie up before his plan comes to fruition, Toffee agrees to give Puck his freedom in exchange for performing one final task: eliminate his old ally, Mirage.During the battle, Mirage find out about this.Furious about his betrayal, Mirage confronts Toffee. However, Toffee shocks her by revealing that he now holds the Wand, the one item more powerful than her. Realizing that she cannot kill Toffee just yet, Mirage leaves, vowing vengeance on her former ally.Using the power of the Wand, Toffee prepares to unleash a great evil onto the world and crush the last person standing in his way.

With her new spell in hand, and backed up by an army of her minions, Mirage returns to Toffee’s castle, seeking to destroy the wand and wreak her vengeance on her former ally before he can carry out his plan. Will she take her revenge, or is she merely playing right into Toffee’s hands? 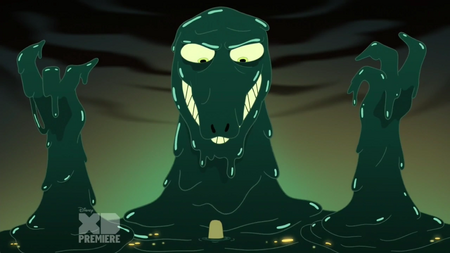 Teaming with Mirage and Ludo

Toffee sends Ludo to the Pride lands into hunting Scar. Ludo and his army arrive Pride Rock and go there for killing Scar.After Ludo's defeat, Toffee teams up with Mirage for his quest to conquer the Pride Lands.

After months of searching a new ally, Ludo finally found someone who could be worthy of helping him in taking his revenge on Discord, (unaware that Discord has been defeated). Ludo prepares to enter the warfare once again...