The Triceratons are a race of aliens, resembling, anthromorphic triceratons. They are the major villains in the comic book and in the 2003 adaptaptions of Teenage Mutant Ninja Turtle and major players in the third part of Disney vs. Non-Disney Villains War.

The Prime Leader, Zanramon, and the Triceratons get a visit from the alien, Lord Dregg, an emissary of an unknown master. The latter makes them a request: weaking the empire of the Saurians, in exchange of meeting his master. The Triceratons then set off to confront the Saurians. They track them into their secret base and immediately start the battle. Before one Triceraton would reach Wraith, he gets tossed by one of his fireballs. The remain Triceratons fire at Chameleon and Seige, forcing them back. However, Dragaunus, and a recovered Chameleon, fire many Triceratons, knocking them out. The rest of the species then blast at Chameleon's weapon, destroying it. While distracting Dragaunus, Monza Ram and his comrades sneak in behind Dragaunus, taking the warlord by surprise. Monza Ram then hits the Saurian overlord, knocking him off. The Triceratons then proceed to destroy a part of the Saurians' hideout, forcing for the Saurians to retreat.

As part of his promise, Lord Dregg shows them his master. Turns out that Dregg's master is no one else than the energy vampire, NOS-4-A2. While shocked at first, for knowing that NOS-4-A2 is a member of Zurg's Alliance, the vampire explains that he gets tired of serving the warlord's demands, as a henchman, and instead plans to take over the universe in his own hands. Though suspicious at first, Zanramon and the Triceratons change their mind, when Dregg announches that NOS has currently an evil plan on his mind. 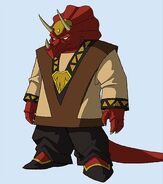