Start a Wiki
The Stepmother's Three is a society, consisting of highly ranked stepmothers from several disney animated movies. It is first origined in the final cutscenes of the second part of Disney vs. Non-Disney Villains War and plays a major role to the next part of the war.

The Beginning of an Alliance

After the destruction of the Forbidden Mountains, Maleficent's former lair, Lady Tremaine spots the Evil Queen, still in the disguise of a hag, wandering around in the ruins. Grimhilde then begs Tremaine for the restoration of her beauty. Tremaine obliges and uses the powers of her wand to restore her into her original self. Then, with the help of Grimhilde, she unearths Queen Narissa, from the ground, after her previous battle with Maleficent's forces, still in the form of a dragon. After being released, Narissa reverts to her original self. The three sorcereress then form the alliance, known as the Stepmother's Three.

Wanting to reclaim her lost power, Grimhilde takes Tremaine and Narissa on her quest to reclaim her castle. However, she has the chance to meet her lost forgotten brother, Lord Maliss, and his minions, the Wizard of Wonderland and Darkheart. When Darkheart unleashes his moster form, by transforming into a cloud of darkness, Grimhilde opens a box and seals his spirit withing inside the box. The Wizard of Wonderland then attacks Narissa, by summoning a blast of lightning, that destroys the debris above from Narissa, almost killing her, although she survives the hit. Tremaine then blasts the wizard with the magic of her wand twice enough to annihilating him. Seeing that his allies got defeated, Lord Maliss escapes from his sister's castle, leaving the castle under the Evil Queen's control once more.

With the Wizard of Wonderland deposed, the Stepmothers Three restore the original Queen of Hearts back to her throne, aiding a new member in their society. However, tensions grow between Narissa and the Queen of Hearts, something that Lady Tremaine doesn't being fond of, and decides to take matters into her own hands.

Later, Doctor Facilier approaches Lady Tremaine requesting her to find a prince for one of her daughters, so that they would arrange a royal wedding. Lady Tremaine agrees with his offer, with Anastasia and Drizella Tremaine being happy enough to hear the news.

Just, as Lady Tremaine gives Facilier, a tour of her city, a Homunculus arrives in their city, called by the named Lust. Lady Tremaine then orders her arrest by the guards of the city, only to be impaled by Lust's finger claws. Seeing the Homunculus power, Lady Tremaine makes a tactic retreat, leaving for Doctor Facilier to deal with the monster's strenght personally.

Preparations for the Special Event

When the time has come for the arranged wedding, Doctor Facilier disguises his minion, Lawrence, into the deceased prince, Naveen, explaining to him that riches and money would give him power. On the other hand, Lady Tremaine transforms her daughter, Anastasia, into the deceased woman, Cinderella, telling her that the love feeling she has, she would share it with the prince. With the secret identiies being in action, everything would settle during the wedding ceremony.

With Doctor Facilier and Lady Tremaine covered in the shadows, Anastasia and Lawrence head for the union of the wedding, oblivious to both of them, each other's real identities. However, the pharaoh, Rameses, crashes the wedding, wanting revenge against Queen Grimhilde, who was attending the ceremony, along with the other Stepmothers Three's members, for killing his son. Lady Tremaine then orders the guards to seize the pharaoh, only to be turned into fearfull animal creatures by Hotep and Huy's magic. Meanwhile, the Kralahome, a new advisor of Rameses, uses his powers, to drop a drappery on top of the Queen of Hearts, angering her. Lady Tremaine then blasts the pharaoh down with her magic. Just then, Lord Maliss enters the scene, where he would have his final fight with his sister. Grimhilde, then, conjures a thunderbolt, that transforms Maliss into his dragon form. Then, she conjures another thunderbolt at him, turning him to a stone gargoyle. Before Lady Tremaine would finish the pharaoh's life, the U.S. Military, under the command of Kent Mansley, arrives to save Rameses' life by taking him out of Lady Tremaine's castle, much to Tremaine's fury.

Lady Tremaine (Founder and Leader of the faction)

Malcho (Queen Narissa's monster form, reverted into her normal self, in the Epilogue of the second war)
Add a photo to this gallery

Lady Tremaine (Founder and Leader of the faction)

The Queen of Hearts (Chief Lieutenant and Ally) 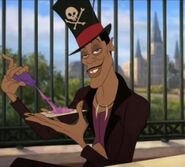 Dr. Facilier (Ally of the Stepmother Three' faction)
Add a photo to this gallery 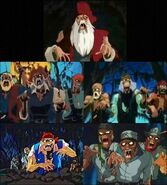 The Card Soldiers (Personal Deck Army of the Queen of Hearts)

Lawrence (Underling of Dr. Facilier)
Add a photo to this gallery

Prince Naveen (Secret alias of Lawrence, transformed by Dr. Facilier's talisman)
Add a photo to this gallery
Retrieved from "https://villainstournament.fandom.com/wiki/The_Stepmother%27s_Three?oldid=86635"
Community content is available under CC-BY-SA unless otherwise noted.