The Seven Dwarfs (Doc, Grumpy, Happy, Bashful, Sleepy, Sneezy, and Dopey) are a group of dwarfs who are close friends with Snow White. When the forces of evil captured the young princess, the dwarfs join up with the heroes to rescue her in Disney Heroes vs. Villains.

Searching for Snow White, the Seven Dwarfs were found on the road by Mama Odie, who told them that the princess had been abducted by Facilier and brought to Forbidden Mountain. The Dwarfs, along with the Forest Animals that accompanied them, immediately changed course and headed towards the Mountain.

En route to Grimhilde's castle, the Seven Dwarfs found that the only road passed through the Horned King's citadel. Deciding that they had no other options, the Dwarfs tried to sneak through, but the King's barbarian warriors and Gwythaint dragons spotted them and moved in to attack. The King's lackey Creeper led the charge, only to be beaten back, shoved in a barrel, and rolled away. As the Dwarfs continued to fight the Horned King's men, they were overwhelmed and sent tumbling down a staircase. But at that moment, the Beast arrived and scared the barbarians off. As the Dwarfs tried to press their advantage, the Horned King arrived and used the Black Cauldron to send them flying back with a gust of wind. Knowing the King was too powerful to try and attack again, the Beast ushered the Dwarfs to safety with Mulan and Quasimodo. Watching them go, the Horned King strangled Creeper for failing to stop them.

Regrouping outside the Horned King's citadel, Beast's group and the Seven Dwarfs were able to get to know each other, though Beast, Mulan, and Quasimodo were unsure if the Dwarfs would be able to fight if they found themselves in trouble again.

At that moment, Gaston and Amos Slade arrived at McLeach's behest, telling Frollo that the Beast's group had been spotted in the area, and Quasimodo was with them. Frollo decided to ambush the group, much to Hook and the Queen's delight. As the villain forces surrounded the Beast's party, Frollo congratulated Quasimodo for leading his friends into Frollo's clutches.As the Seven Dwarfs came to assist, Slade turned his gun on them, but Sneezy let out a large sneeze that caused Slade's rifle to misfire, blasting off his hat. As he and the others moved in to protect the Beast, Quasimodo called Frollo out on his hypocrisy and cruelty. Even so, it seemed to be a lost cause, as Frollo's soldiers moved in to either capture or kill the heroes, when a bolt of magic suddenly teleported the group away.

As the resistance retreated from Castle Grimhilde, the Beast's party was teleported there from Paris and greeted by the figure of Maleficent. The heroes believed they were about to meet their end, but were shocked to discover "Maleficent" was really Mama Odie, who had taken the guise to fool Frollo into focusing his forces on Maleficent's alliance. Odie also told the group what had happened at the last battle, telling them that they needed to find a way to destroy the Black Cauldron and the Cauldron Born.

As the Beast's team escaped into the woods, they believed they had eluded Facilier, and the Beast and Belle finally got a moment to rejoice at finding each other again. However, they underestimated the witch doctor, who used a voodoo doll to inflict harm on the Beast. The others rushed in to help, and the team battled Facilier and his demons. Mushu used his flames to destroy the shadow demons, but the heroes couldn't prevent Facilier from stabbing the voodoo doll through the heart, causing the Beast to collapse. An enraged Mulan attacked Facilier, managing to knock the talisman that gave Facilier his powers out of his grasp. The Dwarfs kept Facilier from claiming the talisman, tossing it to Quasimodo. Facilier begged for mercy, but seeing the Beast's condition, Quasimodo instead smashed the talisman to pieces. At once, the Friends on the Other Side appeared to collect on the debt Facilier owed them for using their power. The heroes could do nothing but watch in horror as the Friends dragged Facilier struggling and screaming into their netherrealm. All that was left of the witch doctor was a tombstone bearing his name and his face in stone, eternally screaming a silent scream. As the heroes recovered, they realized the Beast was dying from his wounds. Belle rushed to his side, but couldn't do anything to help. With his last words, the Beast expressed his joy that he got to see Belle one last time.

As the Beast's team found themselves pinned down by the Horned King and Grimhilde's forces, help finally arrived in the form of Aladdin's resistance army. On the other side of the castle doors, Quasimodo, Mulan, and the Seven Dwarfs desperately tried to keep Frollo out.The heroes followed, linking up with the Beast's team before setting off to find the Horned King and destroy the Cauldron. 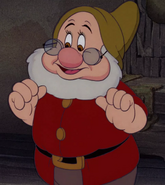 Doc (Leader of the dwarfs, wise and sophisticated, yet impulsive and flustered at times, a close friend of Snow White) 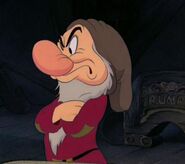 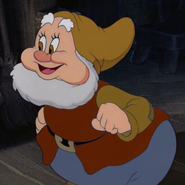 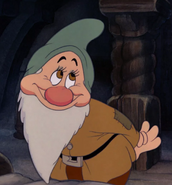 Sneezy (Dwarf with a slight sniffle, a close friend of Snow White) 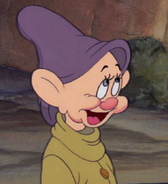