Servitors of the Sultan

The Royal Guards are the personal bodyguards of the Sultan and Princess Jasmine and also the troops of Agrabah's captain of the guard, Razoul. They are minor villains, turned later into supporting figures, in the Disney franchise Aladdin. Having previous encounters with the thief and street rat, Aladdin, the Royal Guards respect later Aladdin, and even help him in his quest to find his friends. The Royals Guards fall easily under the control of the villains, whenever somone disposes off the Sultan.

During the events of the third war, Abis Mal, the new Sultan of Agrabah, and Jafar, the chief advisor and genie to Abis Mal, hypnotize the Royal Guards and task them to look after Prince Phobos, a fallen villain from the previous war, and Miranda, a shape-shifter sorcererss, in the dungeons. One night of patroling, Nerissa arrives at the dungeons and uses her magic to force Razoul and the guards to bow before her, and then frees only Miranda from her cell.

When they recover from the sorceress' spell, Razoul, and possibly the guards report Miranda's escapement from the dungeons and also the fate of the Mukhtar, a hunter of Jafar. While Razoul is concerned to force Abis Mal to make his last wish to Jafar, the evil genie refuses and instead suggests another plan that it will get rid of their recent enemies.

The Royal Guards briefly appear, as they capture Jafar by orders of Maleficent and her allies, after Jafar takes the leadership of Maleficent's faction. However, Jafar vanishes into thin air, before the Guards would imprison him.

The Sultan's guards make their move to apprehend the Baghdad sorcerer Zigzag on the orders of the Sultan, only for the vizier to escape, forcing the guards to search for any trace of the sorcerer left behind

Fighting for the Resistance

In the later events, the Sultan calls upons his royal guards to aid the resistance in the fight against the villains. They are greatly featured in the battle of Bald Mountain where they aid the heroes in slaying Chernabog's demonic minions. They presumably attend the celebration at King Stefan's castle following the end of the war, and, soon after, they return to their homeland in Agrabah to restore order.

The Sultan calls upon his guards once the palace is assaulted by the forces of Keldor, though they are no match against their sheer number. 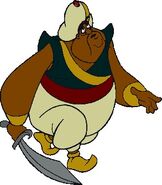