Disney Versus Non-Disney Villains Wiki
Register
Don't have an account?
Sign In
Advertisement
in: Heroes, Characters, Disney Heroes,
and 12 more

The Powhatan is an Algonquian race located in North America. Protected from the courage of its chief and the wisdom of Kekata, the Powhatan appears as one of the primary heroic force in the Disney animated film, Pocahontas. When their home is threatened by the forces of evil, the Powhatan answer the wind of call to defend it.

During the events of the war, the Powhatan Tribe finds itself challenged by the forces of Ratcliffe, as the villains landed on the shore of the native lands, for reasons of conquering the forest to their own advantage. Chief Powhatan leads his warriors into battle. An enraged Kocoum then charges at Ratcliffe, ready to take his life, only to be shot dead by his ally, Rourke, as Pocahontas looks in sorrow. The rest of the Powhatan Warriors then fight off Ratcilffe's and Rourke's men. However, Clayton fires a missile at Namontack, heavily injuring him, although one of the Powhatan Warriors takes Namontack back to the safety. Rourke then sets off several bombs, that brought destruction in the forest, forcing the natives back. The Powhatan Tribe looks in horror, as Ratcliffe conquers the Native Lands for his actual master, Maleficent.

As the war reaches it's end, Ratcilffe and his forces got defeated by other heroes, leaving for the tribe to reclaim the Native Lands. Chief Powhatan and the Natives, then, farewell John Smith, as he journeys his way back to England with the help of his friends.

The Battle for their Homeworld

The Powhatan Tribe finds itself in dangerous situation, when the forces of Ratcliffe invade their homeworld. As soon as Chief Powhatan prepares his men for battle, so Ratcliffe's men did, as he brought the Colonel and Cortez to his side. Kocoum then charges at the Colonel, only to be shot dead, before he would reach him, as Cortez looks in hatred and Pocahontas in grief. The Warriors of Cortez then fire at the rest of the Powhatan Warriors, keeping them at bay. Namontack manages to keep a distance with the invaders. However, one of the Colonel's soldiers shoot him down, presumably killing. Ratcliffe then sets off canoballs, that destroys a major part of the forest, forcing the natives back, as the governor claim the Native Lands for himself. 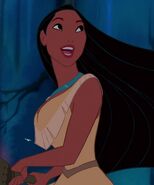 Pocahontas (Daughter of Chief Powhatan, and Princess of the Powhatan Tribe)

The Powhatan Warriors (Defenders of the Powhatan Tribe)
Community content is available under CC-BY-SA unless otherwise noted.
Advertisement