View source
watch 01:54
Obi-Wan Finale - The Loop
Do you like this video?
Play Sound

The Pack is a group of supervillains and thieves responsible for a great number of crimes in New York City. The group is one of the main villainous forces of the Disney animated television series, Gargoyles. The Pack has four main members - Dingo, Wolf, Jackal, and Hyena - as well as two alternating leaders, Fox and Coyote. The Pack features significantly in all three of the main villains wars, though it only arrives in the second Disney Vs Non Disney Villains War.

Let's start with the leader. Born Janine Reynard, the woman we know today as Mrs. Xanatos was destined for the title of his equal. A straight-A student, Janine excelled at everything she tried. With two wealthy, rather pushy parents, Janine was well known for being talented in academics, sports, theatre, art, you name it. Her favorite pastime was actually martial arts. Alongside British exchange student Monty Fisk, Janine spent her time away from homework mastering the ancient arts.

However, eventually, Janine's parents pushed her a bit too hard. Upon turning eighteen years old, they tried to pressure her into law school. Janine, however, wanted to put her martial arts to use. After a heated falling out, Janine left home. The first chance she got, she legally changed her name to Fox. Bitter and angry, she refused to associate herself with her snobbish family name.

Meanwhile, we go from pushy parents, to no parents at all. Nobody is sure how Warren, the man later known as Wolf, lost his parents. He simply wound up on the orphanage's doorstep one fateful night. The orphanage wasn't a fruitful buisness, and was somewhat dilapidated, despite still being a good home for children, it's lackluster toys and lack of any playground meant boredom was bound to ensue. There was, however, a VHS and a collection of movies. Warren took an instant liking to the various Kung-Fu films, from Bruce Lee to Jackie Chan, Warren aspired to be just like the greats. Warren joined a dojo, and was soon adept in martial arts himself.

The only two members of the Pack to know each other from birth are the twins; Jason and Holly, or, as you know them now, Jackal and Hyena. Believe it or not, Jason wasn't always a violent scrapper. In fact, he was bullied on a daily basis as a child. However, Holly was the most feared kid at school. Every day, Holly would have to come to Jason's aid. No bully would dare mess with her. However, this only meant Jason would get beaten twice as bad when Holly wasn't around. Fed up with the bullies, and with hiding behind his sister, Jason demanded Holly 'help him to be tough.' Holly obliged by taking Jason to one of the martial arts classes she attended after school each day. There, Jason learned to defend himself, and made Holly very proud. (Although she'd never admit it) This brings us to the last member, Donald, or Dingo. Donald usually had a hard time making friends, and found himself unsure of where he belonged. He decided to try his chances with 'the bad crowd' and, admittedly, found it to his liking. Donald wasn't a bad kid by any means, he was just desperate for someone that would accept him. Late at night, Donald's friends were a few dollars short of entering a movie theatre. Rather than going through the hassle of trying to sneak in, they spotted a smaller kid, and jumped him. Donald knew it wasn't right, but he knew he'd have to do what his freinds do. He joined in on beating the kid up and stealing his money.

The next morning, news got out about the matter, and Donald got the scolding of a lifetime from his parents. Donald, realizing his mistake, turned a new leaf. He began taking martial arts, and vowed to use his fists for what's right; so no bully could antagonize safely as he did.

All five individuals, adept in Martial Arts, had intent of making their names known. Buisness partners, Carface and Cat R. Waul, decided to make a venture into TV. Putting out an ad asking for martial artists, the duo held auditions, and narrowed it down to five; Fox, Warren, Holly, Jason, and Donald. Carface already had a premise figured out; a team of martial artists take on evil ninjas. Despite finding the premise silly and drab, Waul was keen on the venture, but couldn't help but feel squeamish around humans. Hoping to make things more comfortable, Waul codenamed the group members, Fox, Wolf, Hyena, Jackal, and Dingo, and gave the team an animal motif. The Pack was born.

The show really took off. While the storyline was sub-par, and dialogue cringe worthy, the show was very popular. Eventually, the Pack was invited to a Martial Arts Expo in San Francisco. There, during a Q&A session, one fan named Jack Spicer raised his hand, "So, are you guys really martial artists, or is it all special effects?" Before anyone could answer, a massive debate flared. The crowd split in two, believers and critics of the Pack clashed. Frustrated, Wolf issued a challenge. As this was a national expo, many experienced Martial Artists attended. He promised they'd take on all comers. Several martial artists stood, but they all fell. From that day on, it was a known fact that the skills of the Pack are very, very real.

In attendance of the expo was Valmont, who watched the Pack's display, and saw an opportunity. He approached the team and offered them a large sum of money to pull off a few missions for the Dark Hand. While reluctant at first, the Pack grew to love their side jobs as legitimate mercenaries, and carried on this occupation when not working on the show.

Eventually, the rights to the Pack were bought by Xanatos Enterprises, and David Xanatos got to personally know the team's leader, Fox...

Fox assembles the Pack to free David Xanatos after the criminal mastermind is kidnapped by the Shredder. The Pack is the frontal assault of the breakout scheme, intercepting the majority of the Shredder's guards. Their most dangerous opposition comes from Karai, the "daughter" of the Shredder and a formidable martial artist. Though Wolf and Hyena are injured during the assault, Fox manages to overwhelm Karai. The mission is eventually successful, and the Pack returns to the home base with all its members.

The head of Coyote, one of the Shredder's pet projects, goes renegade; it informs the Pack of the Dreadnoks, a group of killer bikers in the employ of Cobra Commander. The Pack goes to take the group out, having some initial success with a few bikers. Eventually, Zartan, leader of the Dreadnoks, rallies together his crew and repulses the attack. After Wolf and Zartan exchange a few blows, the Pack retreats.

In the aftermath of the battle with the Dreadnoks, the Pack supplies Coyote, now the leader of the group, with a new body. This could not come at a sooner time, as Drago approaches the team with a proposition: the assassination of Shendu. Drago, however, is no fool, knowing that the Pack needs certain upgrades in order to defeat the demon sorcerer. The Pack thus sends in Coyote to steal certain blueprints from a Cobra base. While there, Coyote fights and kills Storm Shadow. Drago then upgrades the members, modifying Jackal and Hyena into cyborgs, genetically modifying Wolf into an actual man-wolf hybrid, and girding Dingo in a suit of armor.

The Pack gears up to battle the newly freed Shendu, breaking into the sorcerer's new tower. They easily outmatch Shendu's Dark Hand enforcers, sending the giant Tohru plummeting several stories. However, Shendu proves nigh unstoppable. He defeats and presumably kills the entire Pack.

The Pack appears in the reboot series in a role different than their original portrayals.

Xanatos recruits the Pack in order to make a stand in the criminal underworld.

The Pack plays a minor but pivotal role in the war: Xanatos hires them to eliminate the Sinister Six and recover Gen-U Tech Labs for him. They succeed, at the cost of their lives. 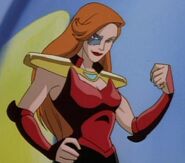 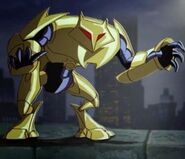