The Mighty Ducks are the eponymous protagonists of the Disney's television series of the same name. Based on the American professional hockey team the Mighty Ducks of Anaheim, the Mighty Ducks are professional hockey players and formidable soldiers. They defend the world from villains like the Saurians, even if it means to put their lifes at risk. They appear in the second Disney Heroes vs. Villains and Heroes vs. Villains as amongst the new heroes who face the villain alliance. 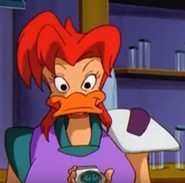 Mallory McMallard (Hot-head and tough fighter of the team)

Grin Hardwing (Enforcer of the team)

Tanya Vanderflock (Intellectual of the team)

Canard Thunderbeak (Former leader, passed leadership to Wildwing Flashblade after Canard's demise)
Add a photo to this gallery
Retrieved from "https://villainstournament.fandom.com/wiki/The_Mighty_Ducks?oldid=94647"
Community content is available under CC-BY-SA unless otherwise noted.