Start a Wiki
The Slave of the Mirror

The Magic Mirror is a background player in the Disney vs Non Disney Villains War. He is from Disney's first animated classic, Snow White and the Seven Dwarfs.

First, the Magic Mirror belonged to the evil Queen Grimhilde, tellisng her all she wished to know, until the queen met her apparent demise at the hands of the sorcerer Rasputin. The Mirror then served the sorcerer and his allies. granting strategy and advice. Later, as the Dark God, Chernabog, laid waste to Europe, the Magic Mirror told Rasputin and his fellow sorcerer Rothbart of a great demon he had learned of is his mirror dimension. He told them of the Emperor of Night, who then proved powerful enough to urn the tides of battle. After the warrior, Ruber, the leader of Rothbart and Rasputin, recruits Kent Mansley, the goverment agent brought to Ruber information regarding the defenses of Frollo. However the Magic Mirror explains that Frollo had recruited another powerfull ally, the dark fairy Maleficent.

In events of the second war, the Magic Mirror explains to Lord Maliss the demise of her sister, Queen Grimhilde, although the sorcerer was happily enough after hearing this new, because now with her sister gone, her castle and the Magic Mirror are belong to him now.

However, Queen Grimhilde was not dead after all, even though the Magic Mirror points out that she was taken out by Rasputin. In fact, Grimhilde had survived her fall and had restored her beauty by the help of Lady Tremaine. Wanting to reclaim her castle, Grimhilde and her allies, Lady Tremaine and Queen Narissa, travels to her original home and confronts her brother personally. After a short fight, Lord Maliss retreat from her sister's castle, leaving Grimhilde to reclaim everything she had lost in the previous war, including the Magic Mirror.

In the events of the second war, the Magic Mirror shows to the Evil Queen, the living daughter of Lady Tremaine, Anastasia. To that end, the Evil Queen sends Ratcliffe to deal with her. However, the governor puts that mission to the Queen's henchman, Humbert. After the Hutnsman fell victim to the sorcery of Anastasia, the Magic Mirror shows to the Evil Queen, the fate of Humbert. Furious that she lost her huntsman, Queen Grimhilde places Ratcliffe in a lower rank, since he was the cause of sending Humbert to the daughter of Lady Treamine, and puts Doctor Facilier as now her new captain, to Ratcliffe's fury. 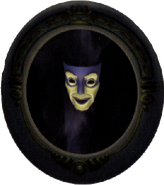 Add a photo to this gallery
Retrieved from "https://villainstournament.fandom.com/wiki/The_Magic_Mirror?oldid=105282"
Community content is available under CC-BY-SA unless otherwise noted.