The Joker is the most notorious villain of Batman's rogues gallery. Often considered among the best villains in fictional history, the Joker is a deranged, psychopathic clown with no care for human life. Pending on the incarnation, he kills people with weaponized clown props or commonplace weaponry. He has featured most prominently in Pokemon Heroes vs Disney and Non Disney Villains, DC vs Marvel Villains, Video Game Villains War and Free For All Villains Tournament.

The Joker breaks free from Arkham Asylum, terrorizing Haven City. Baron Praxis is called in to quell the violent killer, only to be treated with laughter. While the Baron uses his war mecha to fire at the clown, the Joker nimbly avoids his cannonfire. Eventually, the Baron gets smart and fires missiles. However, before the Baron can react, the Joker uses one of his television bombs to destroy the Baron's mecha. The Baron thinks he still has the upper hand, but the Joker reveals a small army of fellow Arkham inmates, including Clayface, Harley Quinn, Talia al Ghul, Solomon Grundy, and Poison Ivy. As the Baron tries to cut the Joker down, Joker shoots him dead.

Joker, reigning as ruler of Haven City, has an untimely encounter with the deposed Count Veger. Veger gets the draw on Joker, leading the clown to taunt the count. Before Veger can fire, however, Kefka Palazzo appears and captures Veger in a magic sphere. Though Veger tries to explain the situation, Kefka kills Veger without a thought. Joker, finding another kindred homicidal spirit, proposes an alliance. Kefka agrees wholeheartedly.

Throughout the next few days, Kefka and Joker set about releasing inmates from the Asylum, occasionally enhancing them with the drug, Titan. One patient, however, doesn't need the formula to impress the Joker: Psycho Mantis. So to prove his worth, Kefka sends the Special Ops agent to destroy SHODAN, to resounding success. Joker also frees Sweet Tooth from his cell in Arkham.

After Sweet Tooth murders the would-be usurper, Officer Tenpenny, Joker congratulates him on his victory. The celebration is cut short with the arrival of Fritz, left an outcast from the death of his master, Nero Neurosis. Fritz reveals a plan to take over Dreamland. Though Joker is skeptical of the idea, Kefka convinces him to go along with it.

The Conquest of Dreamland

After Scarecrow kills Zero2, the demon maintaining Dreamland's shields, Joker and his men are able to make their way through the kingdom. Joker, along with Harley Quinn, makes his way to King Dedede's inner sanctum, where they find the king trying to escape. He fights back, knocking away Harley Quinn and even the Joker when he gets too close. But the Joker readies a massive supply of explosives and buries Dedede under rubble. As Dedede struggles to get free, Joker produces a knife and finishes the job.

Free For All Villains Tournament

Before the War Rises Over The Live Action Universe Joker Had Been Called Upon By Judge Doom Because He wants The Joker Help Him to Become the Most Evil Criminal Master Mind in the Whole Universe. But Joker Decided That it Sound Like That He Should Kill Judge Doom and Become The Most Evil Criminal Master Mind So He Distracted Him With The Dance with the Devil Pun and It Worked and Manages to Use Judge Doom's Steamroller Flaten Him and Walks Off Leaving Him to Die.

Teaming up with Goldfinger:

During the Gangwar Joker and Judge Doom Face off And Went Sour When Joker Pulls Out His Gun to Shoot Him to Make He is Dead. Then After Oddjob Used His Hat to Push Hans to the Window. Joker Shoots Him to his Doom Which Makes Goldfinger The Most Evil Criminal Master Mind.

When The Gangwar Ended With Dr No's Death Over the Hands of Agent Smith Joker Decided to Form an Alliance with Jack Torrance Which He Accept of Join His Forces.

The Riddler in The Joker's Group:

With Agent Smith Killed By Jack Torrance The Joker Introduced The Riddler to Goldfinger.

Joker and Goldfinger vs. Patrick Batemane and Count Olaf:

The Duo: Patrick Batemane (Who was an old friend to Hans Gruber.) and Count Olaf Decided to Kill Both Joker and Goldfinger for Revenge But with all 3 Fighters out Joker was the only one who won.

Meanwhile Joker and Riddler Hired an Old Friend to Take over Goldfinger's Place which is: Two Face!

Since the 2nd War Began Joker Decided to Duke out Sark Because He Feared That He Might Be a Threat But Sadly He Failed to Kill Sark and Ended Up at the Animated Universe.

Joker Forming a Deal with Sykes:

Teaming Up with The Riddler:

After The Riddler was Defeated by Metal Sonic in the Multiverse. The Joker and The Riddler Reunite and They Decided to Go and Find Two Face.

Following the Events After The Joker Reunite With The Riddler. Joker Hires an Employee That Used to Work for Sykes Name: Joe Chill. To Kill The Ringmaster. Because He Promises Cruella De Vil That He Would Steal The Money Sykes Promises to Pay The Joker. And Chill Agree to Take Him Down.

Following the Events of Agent Bishop's Fight Against Sykes. The Joker and The Riddler Reunite with Two Face. And Two Face Decided to It's time to Finish off Both Cruella and Sykes. And Riddler Suggests that The Trio Betray Sykes.

The Joker Arrives at Sykes' Office and Attacked Sykes and Stabbed Him with a Knife.

Forming an Alliance with The Penguin:

After The Penguin's Escape From His Fight Against Wrath. The Joker Forge an Alliance with Penguin To See How Useful He is To Help Him Expand His Criminal Empire To Fight Against Cruella's Empire.

Free For All Heroes vs. Villains War Tournament Series:

One of the first few villains to be summoned by Bowser, Dr Robotnik, Jafar, Maleficent, Loki and Dr Doom:

After the agreement for their alliance is made, Maleficent decides to summon all the villains to aid her alongside Bowser, Robotnik, Jafar, Loki and Doom's plans of ruling the world and one of the first few villains to be summoned reveals to be The Joker who has plans of his own.

Battling against Kim Possible and forming a criminal empire with his new ally: The Green Goblin:

The Joker's presence on the upcoming war doesn't go unnoticed by Wade who informs Kim Possible and Ron Stoppable about The Clown Prince of Crime's plans and Kim along with her friend: Ron goes to investigate The Joker's plans which soon leads them to a fight with the Joker. After retreating from his fight with Kim Possible Joker was displeased with his chance to form an crime spree failed until The Green Goblin arrives to form an alliance with The Joker in exchange they would build a powerful criminal empire between Gotham City, New York City and soon the entire world.

The Joker and The Green Goblin were making war plans for their criminal empire until they get a visit from Edward Nygma A.K.A The Riddler who poses an alliance to join them, seeing potential within him The Joker along with The Green Goblin recruits him to their empire of crime.

After learning about his and Nightmare Moon's first mission together on taking down Mickey, Donald and Goofy. The Joker encounters Shocker and recruits him to his criminal empire which The Shocker accepts the clown's offer of joining his and The Green Goblin's criminal empire.

Sending The Riddler and their newest allies to defeat Batman, Spider Man and Iron Man:

When Amora the Enchantress arrives and assigns both The Joker and The Green Goblin to destroy one or two members of the newly formed alliance between The Justice League and The Avengers, The Joker takes The Riddler's suggestion to test him alongside The Penguin and The Scorpion's skills to the test by taking out Batman and Iron Man while they're on a mission to recruit more allies for their team. Which The Joker, The Green Goblin and Amora the Enchantress accepts The Riddler's suggestion.

The Joker in the Live Action Universe (Jack Nicholson) 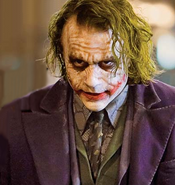 The Joker in the Live Action Universe (Heath Leager)

In mask of the phatasom

The Joker, as he appears in Video Game Villains War

The Joker in The Batman
Add a photo to this gallery
Retrieved from "https://villainstournament.fandom.com/wiki/The_Joker?oldid=117153"
Community content is available under CC-BY-SA unless otherwise noted.