The Iscariot Organization (else known as Vatican Section XIII) is a society in the Hellsing anime series. The division of the Catholic Church, led by Enrico Maxwell and Alexander Anderson, the Iscariot is arguably one of the most antagonist factions in the resulted anime adaptation, Hellsing: Ultimate, and plays a significant role in both Manwhooo's Disney vs. Non-Disney Villains War and Sonishadow21's Non-Disney Villains Tournament.

Pre-War: The Sheperd and the Lost Sheep

Prior to the events of the first war, the young Enrico Maxwell lost his mother from a previous assault with Frollo. Not having other places to live, Enrico makes his home to the orphanage of Father Alexander Anderson, vowing that one day he would have his vengeance against Frollo.

The Paladin and the Judge

Between Frollo's death in the first war and the beginning of the third war, Father Alexander Anderson claims the Palace of Justice, as a base of his own operations. Sadly for him, the resurrected Frollo and his forces return to reclaim their former base. Alexander Anderson does his best to keep Frollo's lieutenants at bay, including Gaston, Ratcliffe and Captain Hook. Though, he takes a hit from Ratcliffe's musket, Anderson manages to heal the wound. Gaston and Hook then repel the Paladn with their own weapons, only for Anderson to unleash a flurry of knives, driving Hook out of the battle. Before he would finish off his enemies, Frollo appears, backed by his military soldiers. Outmached, Anderson retreats, using the Bbile pages to do it so, swearing to Frollo, that they would meet again.

A Familiar Face from the Past

Meanwhile, the now adult Enrico Maxwell is summoned in a meeting of Shan-Yu, the current ruler of the whole world. The Hun warrior states that he would not interfer in their failrs. However, he makes his word clear, that any petting fight will be met by the brute force of Shan-Yu. Later, Enrico Maxwell, backed up by Alexander Anderson, summons Frollo to the Vatican, and there introduces his formalites to the French judge. When Frollo refuses him, Maxwell and Anderson lose their patience and prepare to fight the judge. However, Frollo is also supported by Captain Hook and his crew of pirates, forcing the two of them to leave. Anderson then vows to Maxwell, that next time he would cut Frollo to pieces.

The Iscariot Organization appears, before Cortez's alliance, as Alexander Anderson, the messenger of the Iscariot Organization, aids Cortez, the Colonel, Van Pelt and Javert to the Catholic faction. Later, Enrico Maxwell holds a meeting with King Fuehrer Bradley. In spite of Enrico attempts to persuade Bradley to join him, Bradley instead spurns him and rejects God entirely and Enrico's religion, leaving both of them to leave in bad terms.

After the Major bombs most of London, a meeting of Iscariot priests is held. When the other priests inform Maxwell of the death of most of London's citizens as well as the President of the United States by Rip Van Winkle's forces, Maxwell responds with utter apathy, as he does not lament the deaths of non-Catholics. Futhermore, the Major's actions fit right into his plans.

The Death of Cortez

Later, Cortez gets murdered by a young female recruit, who turns out to be the shape-shifter Homunculus, Envy. Before he would kill Javert, who had witnessed the horror scene, he is haulted by Van Pelt's assistance, who keeps the Homunculi at bay. Envy then takes his Homunculi form to deal with his enemies. Despite his attempts, Envy is forced to retreat, when Alexander Anderson enters the scene, leaving for Javert, Van Pelt and Anderson to chase off the Homunculus.

After Envy manages to escape from their clutchers, Alexander Anderson calls Enrico, questioning him about the recent assassination. Enrico manages to please Anderson, by explaining him that he has a plan in store for the Iscariot and his allies. Later, Enrico makes an alliance with the Britannia ruler, Charles zi Britannia. Wanting to impress his ally, Enrico summons a wicked priest, who gives away Cortez's location to Envy. Informed about the confess of the priest, Enrico has his closest lieutenant, Heinkel Wolfe, to eliminate the priest, while Britannia looks on.

While on his search to find Envy, Alexander Anderson happens upon Greed, another Homunculus. Before Greed would shield himself, Anderson cuts off his severe arm. He then unleashes a flurry of knives on his foe, weakening him furthermore. When Greed is exposed clearly to the priest's fury, Anderson hacks his throat with his swords. At that time, Greed's goons rush to save their master. However, Anderson easily hacks them to pieces. An enraged Greed attempts to counterattack, only for Anderson to fill his torso with knives. He then leaves the unconscious body at the mercy of Wrath, the alias of King Bradley.

When Van Pelt goes missing, the Colonel and Javert, still on the side of the Iscariot, head off to find him. They, eventually, find "Wrath", in the disguise of King Bradley, who challenges the two of them to a death battle. Wrath manages to impale through the Colonel's chest, even though the Colonel manages to survive the hit, before continuing the same action to Javert. When Bradley's adopted son, Selim Bradley, enters the scene, both the Colonel and Javert look in horror, as Wrath chockes the life out of his son. Taking advantage of Selim's peculiar skull weapon, Javert manages to break himself free and tosses the skull to Wrath, incinerating him alive. When the Colonel stands up and attempts to escape, along with Javert, he watches over Selim's corpse, as shadows engulf his entire body. Turns out, that the whole battle is a trap, as Selim is revealed to be no one else than the Homunculus, Pride, and "Wrath" is revealed to be Envy in disguise.

Captured by Pride, the Iscariot's agents are brought before Dante, where they are reunited with the fellow partner, Van Pelt. Dante then teleports the trio to the Live-Action universe, beyond the Alchemical Gate, through the sacrifice of a young toddler.

In the later events, Charles zi Britannia pushes his gambit to take over the world, by fusing Amestris, led by King Bradley, and Iscariot, led by Enrico Maxwell, to his growing empire. This brings tensions once again between the two leaders, due to their previous disputes. Enrico gets a strong support, when the mysterious priest, Father Cornello, aids the resistance of the Iscariot.

Meanwhile, Alexander tracks King Bradley into one of his headquarters. Desiring nothing more than his elimination, Anderson is forced to hide his true actions, when Bradley's family also comes to Iscariot's stronghold, leaving with King Bradley altogether, much to his annoyance.

Renaldo (Maxwell's righ hand and Archbishop of the Catholic Church)

The Armed Priest Corps (The loyal troops of Alexander Anderson)

Renaldo (Maxwell's righ hand and Archbishop of the Catholic Church)

The Armed Priest Corps (The loyal troops of Alexander Anderson)

Cortez (A villain from the animated movie, The Road to El Dorado, Cortez joins officially the Iscariot, in this tournament) 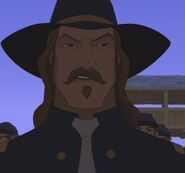 The Colonel (The villain from the animated movie, Spirit: Stallion of the Cimarron, the Colonel becomes an official member of the Iscariot Organization, in this war)

Van Pelt (The main villain of the Live-Action movie, Jumanji, and it's following animated series, the Animated version of Van Pelt is initially introduced as one of the Iscariot's top agents, in this tournament) 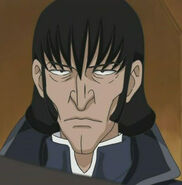 Inspector Javert (The main villain of the famous series, Les Miserables, the Animated Version of the character is introduced as the Iscariot's top agent, in this tournament) 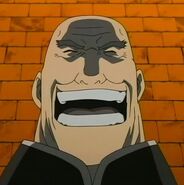