Disney Versus Non-Disney Villains Wiki
Register
Don't have an account?
Sign In
Advertisement
in: Characters, Villains, Dc villains,
and 9 more

Seeking to strengthen their newly formed alliance, Slade decided to call in his deal with the HIVE Academy, gaining the services of their top students, Gizmo, Jinx, Mammoth, See-More, and Private Hive, otherwise known as the HIVE Five. Placing them under the leadership of Negaduck, Slade decided to test their abilities by sending them to take down a group of assassins known as the Pack, consisting of Fox, Wolf, Dingo, Jackal, and Hyena. The group confronted the Pack at their studio, getting their attention by causing a bus to crash nearby. As Jackal and Hyena attempted to attack them, Private Hive knocked them back with a blast of water. Seeing what they were dealing with, Fox mobilized the group to take down their foes. As Gizmo advanced, Dingo downed him with a boomerang. Wolf rushed at Mammoth, but Mammoth proved to be the stronger of the two and caught his punch, allowing Jinx to send Wolf flying with a blast of magic. Seeing their allies fall, Fox and Dingo attempted to come to their aid. However, Negaduck blasted a hole through a wall, burying them in rubble. Finding themselves outmatched by the super-powered teens, the Pack retreated, much to Negaduck's pleasure.

A group of Shredder's operatives, led by Demona and Alpha, seize control of the H.A.A.R.P. (a US government research program), in order to use the technology there for a special project Shredder has been working on...

Shredder decides that the time has come to eliminate Mojo Jojo once and for all. Gathering the members of his faction, Shredder launches an all-out assault on Mojo’s headquarters. Mojo, however, is well-prepared, and mobilizes his army of apes to repel them. The two armies clash, but only one can emerge as the victor...However, Mojo isn’t willing to go down without a fight, and injects the remaining Chemical X into himself, mutating himself into a monstrous giant. In his new form, Mojo begins laying waste to Shredder's forces. However, Negaduck still has a score to settle with the ape supervillain, and isn’t going to give up so easily...

Vs The Masters of Evil

Having returned from his battle against Skullmaster, Skeletor hopes to begin weakening Shredder’s empire, beginning by sending Baron Zemo and the Masters Of Evil to eliminate some of his top assassins: the HIVE Five.

Vs The Z Fighters

With Deathstroke and the Red Hood, Deathstroke has sent his students known as the H.I.V.E to fight off a group of heroes known as The Z fighters so they can prove themselves they can be commanders of their own army, With the Z fighters (Excluding Goku and Gohan) who is being leaded by Trunks as they are waiting for Goku that's until the H.I.V.E Shows up to ruin their training who will be the one to win this Five on....Six?

Vs Rourke and Helga

After he joined Shredder, Negaduck ask H. I. V. E if someone would join into his new Fearsome Five. Before they could answer, Rourke and Helga attacked their Base, for getting more information for Frollo. Negaduck won't let another Frollo's minions to stop him once again. 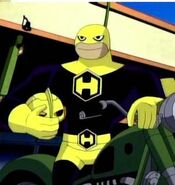