Back at Mojo's lair the Beat-Alls are finally reunited and the one who planned the reunion is none other than Him, the time has come to give new powers to his comrades with new power, the Devil's plan begins.

Ratigan somehow survived his fight against Mojo (and is still in Human size) sends Edgar to form an alliance with Madame Devil to take care of some little pest. Edgar is almost on his way to Cruella's house and spots the Gangrene gang creating havoc. Edgar see's this might be his opportunity to win some more extra money of his boss if he can beat the hole group alone.

Vs The Delightful Children

The group of teenage delinquents known as the Gangreen Gang, led by Ace, were wandering the streets, looking for opportunities to cause trouble as they normally would. After a while, they came across a group of seemingly defenseless children, and began picking on them, taunting them and promising to "show them how to have fun". However, the children, known as the Delightful Children From Down The Lane, were nowhere near as harmless as they looked, and quickly demonstrated this by pulling out a laser and zapping the Gang. The Delightful Children then used another of their devices to knock out the other members of the Gang, leaving only Ace. As Ace tried to talk his way out of the situation, the Children responded by knocking him out as well. With the Gang beaten, the Delightful Children departed.

Mr. Burns and Plankton hire the services of the Gangreen Gang and Fuzzy Lumpkins (none the wiser to Burns's attempt on his life) in preparation for future conflicts with Glomgold.

With the war coming to an end, Burns and Plankton gather their allies to take down their rivals, with Plankton introducing a few of his relatives and a newly rebuilt Darrell as extra backup.

While scoping out Glomgold’s HQ in preparation for the attack, the Gangreen Gang are cut off by Glomgold’s security, the Beagle Boys, and a fight breaks out between the two gangs.Gangreen Gang beat them easily.

With the Beagle Boys dealt with, the rest of Burn’s forces charge in, catching Glomgold and his allies off guard. Glomgold, Fat Cat, Karnage, and his pirates face off against Burns, Rob, Fuzzy Lumpkins, Rancid, Darrell, and the Gangreen Gang, with Plankton aiding them remotely and waiting with backup...

With his forces defeated, Glomgold mounts one of his robots with the intent to wipe out his rival for good. Plankton and the others are overwhelmed by the arsenal of Glomgold’s robot.

Elsewhere, at Joker Manor, the Joker welcomes his new members into his alliance: the Gangreen Gang, the Schlepper Bros., and Chang.

Valmont arrives at Joker Manor and asks for help to find their fourth talisman in order to release Shendu. The Joker agrees, and sends out his bumbling henchmen, the Gangreen Gang to France to retrieve it. But only one of them will steal it, while the rest take out none other than Ash Ketchum.

Vs Richie and Tracey

Richie comes into Cobra Industries and helps Tracey escape from his cell. However, the Joker was watching this on tape, and dispatches the Gangreen Gang into attacking him. However, Richie and Tracey are too hard to deal with.

Ace and his boys decide to play a game of dodgeball with TJ and his friends. TJ and company seem to be getting pulvarized until Ace goes too far and hits a kid. This leads to one of TJ's friends to face off against the gang.

Mojo Jojo starts his attack on the Cuphead Bosses by sending out the Gangreen Gang to deal with the Root Pack. Anyways, as soon as they find in danger, a certain "insectoid man" is going to "give them a hand"...

While walking on the street, Gangreen Gang was attacked by The Cactus Gang. The Gangreen Gang easily defeat them, until their leader appear and save them for his uprising plan. 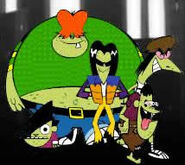