Disney Versus Non-Disney Villains Wiki
Register
Don't have an account?
Sign In
Advertisement
in: Aliens, Minion, Factions,
and 22 more

The Drej are major antagonists in Titan A.E. They are race of energy aliens who tried to destroy the Earth in the Disney vs. Non-Disney Villains war.

In the wake of the war, the Drej start their expansion over the galaxy, by initially destroying the planet Earth, currently ruled by villains of every sort. But, before do it so, the Drej decide to drop in Planet Z, ruled by the space warlord, Emperor Zurg, hoping to stop any obstavle, that it could threaten them. However, they retreat, after Zurg's planet is taken over by Mok, in the absence of Zurg.

Later, the Drej are informed by Jafar about Zurg's uprising in the universe, thus the Drej Queen decides to take matters into her own hands. The death of one of the Queen's comrades, Preed, becomes the final straw for the Drej, as they hesitate to attack Zurg at any cost. The Drej Queen then assembles her forces on Earth, as they set to make their final battle on the top scale of the universe.

Death in the Battle of Space

During the main battle, the Drej Queen rallies her soldiers to attack Earth. The Drej air fleet find themselves cornered by Zurg's recent emissary, Gantu, who also happens to be the assassin, who kills Preed. Before they would even attack, Gantu blasts them to oblivion. Meanwhile, the Drej's ground forces emerge on the planet, though they are confronted by Zurg's top lieutenant, Agent Z. Even though, they are initally stunned by Agent Z's hornets, the Drej soldiers manage to recover and destroy many robots in the process. While both the air and ground forces class with Zurg's henchmen, they recieve a fatal blow. In the end of the battle, Zurg activates one of his deadliest weapons, as he unleashes the Uni-Mind death ray on the Drej race, wiping both the Drej Queen and the remain Drej soldiers out the picture.

The Drej emerge in the war, as the Queen sends her subordinate, Sinestro, on mission to Earth, with the goal of annihilating the entire human race. 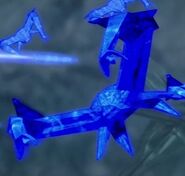