The Dark Hand is a group of international terrorists and thieves led by the villainous businessman, Valmont.

The group has three consistent members - Finn, Ratso, and Chow - and always takes on an enforcer of some kind. Pending on the incarnation, this figure has usually been Tohru or Hak Foo. The Dark Hand members usually rely on conventional weapons, but they are equipped to use magical artifacts, such as the Talismans. The group seeks to bring about the rise of Shendu, a powerful demon sorcerer.

The faction plays a major role in the second Disney vs Non Disney Villains Tournament.

The Dark Hand arrives in England, hoping to steal one of Shendu's Talismans from Sarousch. King Ratcliffe has commissioned guards to protect Sarousch's show, however, making the attack far more difficult. The Dark Hand unleashes its contemporary weaponry and is thus able to overwhelm the guards. Valmont eventually takes the Talisman from Sarousch, even though the latter escapes.

Valmont later receives word thatQueen Narissa possesses another of the Talismans. He and his men journey to Andalasia in order to nab it, but the Queen is prepared. She uses her magic to startle the Dark Hand, but this only delays the assault. Enraged, she transforms into a powerful dragon; the Dark Hand proves more eager to fight the dragon than the sorceress. Unsurprisingly, Narissa repels their charge. Valmont and Narissa duke it out, with Valmont emerging victorious, acquiring the Dragon Talisman for his troubles.

After Hand enforcer Hak Foo acquires the Pig Talisman, Shendu reproaches the team for collecting the Talismans at such a slow rate. Though Finn objects to Shendu's control over the faction, the demon tells them of his defeat by the Dark Dragon prior to the events of the war. Hak Foo acquires yet another Talisman later on.

The Dark Hand's search for the Talismans goes into a lull, as none of them can be found. The Dark Hand spends the rest of its time robbing banks while using the Talismans as weapons. As fortune would have it, the Forty Thieves attack the Dark Hand in the middle of a heist. Finn crushes a few with telekinetic abilities but ends up unconscious from a punch by Sa'Luk. Ratso blasts a few thieves away before flying into the wall after being hit by a shuriken. Chow turns a few of the thieves into rats. The Dark Hand also hires a few dozen ninjas to scare the remaining thieves away. After Hak Foo and Valmont knock out the leader of the thieves, Sa'Luk, they discover that he is in possession of the remaining Talismans.

Valmont wastes no time freeing Shendu upon the collection of the Talismans. The Pack and Amin Damoola attack the Dark Hand after Shendu is freed, but the demon sorcerer quickly defeats both threats. The Dark Hand, however, soon splits from their master once he joins forces with Queen La and the Skeleton King. The group formally leaves the war during the Battle of San Francisco, leaving behind a reprogrammed Coyote.

Valmont leads the Dark Hand to Russia, in search of a Talisman allegedly in Ludmilla's possession. Ludmilla, however, does not have the talisman, just a potion that turns her into a dragon. Though the Dark Hand fights back, with Tohru valiantly trying and failing to stop Ludmilla, the members are forced into retreat. Despite the group's being pursued, Finn finds the Talisman; Valmont uses it to vanquish Ludmilla.

The Dark Hand suffers a serious blow when Scorpion and Chase Young finish off the Dark Chi versions of Finn, Ratso, and Chow.

Under direct orders from Valmont, the Dark Hand's henchmen are sent into a museum, to retrieve a magical talisman, required to free the demon, Shendu, from his prison statue. Sadly for them, another smuggler takes up to the punch, as Selina Kyle infiltrates the museum, on purpose to claim the talisman for her own benefactor. A break out begins, as Finn, Ratso, and Chow rush to collect the talisman by force, only for the masked hero to counter-attack most of the villains attacks, knocking them out. When Finn recovers, he uses the chance of blasting the ceiling successfully above Selina, blocking her exit. Just then a crew of police officers arrive on the scene, forcing the Dark Hand to retreat, with the talisman, still on the possession of Selina.

The Dark Hand's henchmen return to Valmont and Shendu, reporting their loss. Shendu demands, that he would not tolerate another humiliation, as a result for the group's predicament.

On the behalf of Valmont, Hak Foo is sent to deal with the great nuisance of Red Hood, a super-hero, who interfers on the Dark Hand's goals. Hak Foo encounters Red Hood, although accompanied by his sidekick, Red X. Nevertheless, he manages to beat down Red Hood, with several critical hits. While Red Hood easily falls, Red X proves to be a great opponent, as he manages to hold off his foe, and deflect most of his attacks. Upon Red Hood's recovering, Hak Foo is helpless, as Red Hood and Red X team up to beat him down, eventually defeating him.

Partnership with the Heylin

Chase Young, a Heylin warrior, delivers one of Shendu's talismans to the Dark Hand, explaining in the process his mutual agenda with the Dark Hand, much to the excitement of the Dark Hand, though he pressures them to act fast and overtake the criminal empire, in order to facilitate their task of freeing Shendu.

Much earlier in the war, Valmont sent Tohru to take down King Dedede. However he later discovers that his minion has been taken down by a monstrous version of Mickey Mouse and decides to recruit Scar to help him and as a reward for his help, Valmont will provide Scar with ideas to kill Zira. 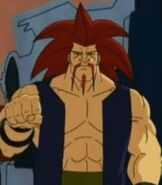