The Dark Council is a faction, formed by several sorcerers across the universe. The alliance plays a central role in the early events of the Disney vs. Non-Disney Villains War.

Before the first war started, Chernabog and his brothers had assembled the Crystal of Darkness, a powerful crystal strong enough to wipe out all the heroes of the universe and the rise of the villains in the world. But the dark fairy, Maleficent, had other intentions for the crystal and so she called the most powerfull villains across the universe, including the God of the Underworld, Hades, the lich king, the Horned King, the wicked queen of Andalasia, Queen Narissa, the Goddess of Discord, Eris and Hordak to the Forbidden Mountains. Together they formed the Dark Council, a faction which it would prevent Chernabog's rise in the universe. Although Narissa and Hades were not interest in the idea, Hordak insisted that they were the most powerful wizards in the known world, claiming that they should take the crystal for their own purposes. This was not well fitted in Maleficent's mind, who claimed that the Crystal power's were strong enough to tear them apart. Also Eris pointed out that even if they use the crystal there was no guarantee that they will be wiped with anything else, an idea which Hades approved to her. Maleficent explained that they must stop Chernabog's actions, but the Horned King questioned to the others the reason of stopping him instead of joining him in his dark goals and be rewared for his pledging their loyalty to their cause. Hades doubted that it would end well for them if they would attempt that plan. Maleficent then stated her plan to the others and proposed to them that they must take down the Crystal of Dakness by removing all their undesirable threats. With that plan their enemies would be destroyed and they would be free from Chernabog's rule if they must use all of their powers to finish the job, an idea approved to everyone.

The day has arrived to which Chernabog, the Nightmare King and the Emperor of Night used the Crystal's powers to eliminate all the heroes and possibly their dangerous threats. However the Dark Council arrived on Bald Mountain to stop Chernabog. Unfortunately at Maleficent's shock and anger, Hordak and Narissa betrayed the faction by taking the Crystal of Darkness for their own ends. The Horned King attempted to stop Hordak, but his action was stopped by Hordak's magic, who blind the lich king temporary. At that moment Chronos arrived in the scene. The titan had allied with Hordak and Narissa to take both the Crystal of Darkness, but also to make a final stand with his son Hades. Shocked to see his father on Bald Mountain, Hades decided to take on his father, by eliminating his summoned minions, while feeding his other servants to his pet, Hydra. Furious, Chronos confronted his son personally and attacked him with his magic weapon, pouring the god with lava. In a final stand, Hades opened a portal, which it led to the River Styx of the Underworld, and pushed his father to the portal, locking him for the time being in the Underworld. Meanwhile Maleficent ended Hordak's plan by banishing him to the realm of Despondos. Seeing that her allies were defeated, Narissa retreated from the battlefield, leaving the others to continue their action by using all of thier powers to destroy the Crystal into many pieces and scatter them across the whole universe. Just as Chernabog swore revenge at the faction, the Dark Council retreated from Bald Mountain, happy enough that their plan had worked.

Since some of the members were betrayals of this alliance and since many sorcerers had stayed out of the compretition for the time being, the Dark Council had fallen apart and it didn't make another appearance in the next parts of the war.

Disney Vs Non Disney Villains War - Before The Fall

Maleficent (The leader of the faction, and also the Ruler of the Forbidden Mountain)

Hades (The God and Ruler of the Underworld) 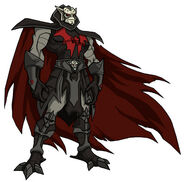 Hordak (Ruler and Warlock of Eternia, traitorous member of the faction)

The Horned King (Member of the faction, Ruler of Prydain and Annuvin)

Eris (The Goddess of Discord and Ruler of Tartarus)

Queen Narissa (Ruler of Andalasia, traitorous member of the faction)
Add a photo to this gallery 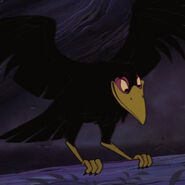 Diablo the Raven (Familiar of Maleficent) 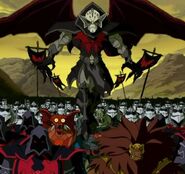 Horde Wraith (Minions of Hordak)
Add a photo to this gallery

Typhon (Archive Footage, used to represent the Hydra's attacks against Chronos' servants)
Add a photo to this gallery
Retrieved from "https://villainstournament.fandom.com/wiki/The_Dark_Council?oldid=115553"
Community content is available under CC-BY-SA unless otherwise noted.