Disney Versus Non-Disney Villains Wiki
Register
Don't have an account?
Sign In
Advertisement
in: Factions, Team Villains, Disney vs Non Disney Villains the Series,
and 54 more

The Cactus Cat Gang is a villain faction, consisted by feline gangsters, who, apparently, appear to be Western type bandit cats. Led by the infamous Cat R. Waul, the Cactus Gang is featured in the fanfiction villains tournaments, made by the respective users. It originally appears in the Don Bluth animated movie, An American Tail: Fievel Goes West, continuing it's role in the TV series of the same franchise.

The Cactus Gang ally itself with the communist pig, Napoleon, hoping to rebel against their maker, Mok Swagger. Unfortunately, Napoleon's expanding empire threatens the opposal faction of Mojo Jojo, a villain with the same intetions with Napoleon. During a meeting with fellow criminal, Warren T. Rat, Cat R. Waul and his henchmen recieve a fatal blow from the forces of the monkey scientist, composed by Brain, Pinky and Jenner. When Warren falls to Jenner, Cat R. Waul sends his henchmen on the battle. One-Eye takes himself on Drake, only to be defeated out by the penguin's brute force. T. R. Chula then blasts Drake with spiderweb, knocking him out. Cat R. Waul then faces off Jenner, shooting him with a massive gun, badly injuring him. At that moment, a recovered Drake interfers, threatening Waul's life. This proves, however, to be a distraction, as the wounded Jenner moves in and cuts a rope, that triggers a catapult, tossing Cat R. Waul and the rest of the Cactus Cat Gang's members, into a mail bag. Soon enough, a mail train takes the mail bag, with the villains inside of it, to it's unknown destination.

Back in the Game

When Dolf allies himself with the current President of America, Cobra Commander, the turkey judge, Rupee, calls the remain numbers of the Animal Farm, including the allied Brain and Cat R. Waul. Rupee states about Dolf's insanely motives, as he would brought chaos and mayhem to the Animal Farm, if Waul would not hesitate in taking action. Waul, however, has other plans and drives Rupee out of the council meeting, in a much hilarious style. Not wanting to overhear the turkey's babblings, Cat R. Waul, enlist the services of one of Dolf's lieutenants to take care of Rupee. The lieutenant takes some soldiers to his aid and imprisons Rupee to Dolf's jail. 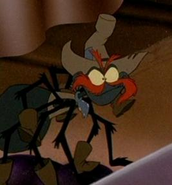 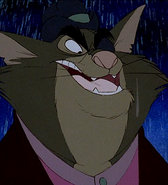 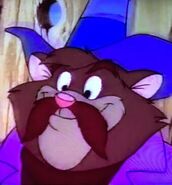