Disney Versus Non-Disney Villains Wiki
Register
Don't have an account?
Sign In
Advertisement
in: Characters, Heroes, Non-Disney Heroes,
and 22 more

The Animals are the primary protagonists of the George Orwell's novel Animal Farm. Serving as an allusion to the enslaved Russian citizens under the leadership of Czar Nicholas II, and later under by Joseph Stalin, during the events of the Russian Revolution of 1917 and the Stalinist era in the Soviet Union, the animals are the dairy barn animals of Manor Farm, owned by the farmer Mr. Jones. Ultimately, they casted Jones out of the farm and established a new "Animal Farm" where only they could seize control of the farm, though at the cost of being enslaved to Napoleon's new authority. The animals also appear as minor players in the Non Disney Villains Tournament, though they appear as major players in Heroes vs. Villains and Non-Disney Heroes vs Villains wars.

Enslaved, Yet Hopes for Freedom

Napoleon seizes the control of the Animal Farm for himself and his allies. During the battle against Mojo Jojo's forces, the animals are the first creatures to attack Mojo Jojo's frontal attack, stopping Woundwort's rabbit army. While one pig charges at a rabbit, throwing him off, Benjamin the donkey, kicks many other rabbits, knocking them down. Drake then stops the pigs with a puch of his fist. One dog of the Animal Farm then sweeps in and tears in many rabbits he would found. The recovered pigs charge to Woundwort, only for him to be tossed out by the general's force. When the rest members of Napoleon's alliance kill off the heads of Mojo Jojo's empire, Dolf, one of Napoleon allies, reveals his secret plan by siccing the animals on their deceived leader, Napoleon. Napoleon has not enough time to escape as he is killed off off-screen by the animals. The animals do not re-appear in the next events. It is may pressumed that either they got assimilated into the National Crows Party of Dolf, or stayed in the Animal Farm, freed from the tyranical rule of Napoleon.

Instead of living at Manor Farm the animals live at Patch of Heaven along with many other animals and friends. Before the forces of evil would spread across the world, the animals live a peaceful life, usually working for the harvest of the farm or welcoming new animals to their farm. The owners of the farm, Pearl Gesner and Widow Tweed, are gentle and caring women who love to take care both of the farm and the animals. However, their peaceful life is ruined by the arrival of Sheriff Sam Brown. The latter brings to Pearl a bank notice, explaining to her that if she wouldn't pay her full amount she owned, the bank would take the farm. Unknown of what to deal with this hard situation, the owners leave their animals in their fate. Jeb states that they would sell the animals and probably kill them. While the animals are discussing about this recent event, Napoleon goes to his secret room, where he order his dogs to deliver a secret plan.

The Take Over of the Patch Heavens

Later on, a disguised Alameda Slim and Amos Slade purchase the farm from Sheriff Sam Brown in the auction, much to the annoyance of the animals. While the auction is still in process, Napoleon wanders off, causing some animals to be suspicious about the whine. One day, Napoleon reveals a part of his secret plan, as he introduces the con artist Cat R. Waul, explaining that his help will be required to get rid off the purchasers and establish their own animal farm. When Amos Slade, Alameda Slim and Farmer Jones (the new recruit), almost sign the contract of keeping the Patch of Heavens, the animals start their rebellion at the humans. The offense of the animals at first frighten the hunters, however, the hunters stand up and prepare to stop the rebellion. With Spirit, Tod, Wilbur and Maggie dispatching the hunters, the animals attempt to corner Jones, only for him to flee from the farm at the last second along with other hunters. The animals then take control of the farm, though Tod spot Napoleon fleeing from the barn, making him more suspicious about the whine's goals.

A Traitor in the Farm

However, as it turns out, Tod is sentenced to exile, as Napoleon sees him as a threat, and convinces the other animals that he was spying to him. Furthermore, he lies to the animals, explaing to then that Tod plans the return of Slim and the other Cruelty Squad Members. At first, the animals protest about Napoleon's decision. However, Napoleon makes his word clear, forcing the animals to obey his decision. 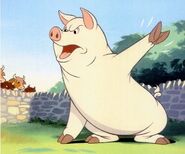 Boxer (Enforcer of the Animal Farm) 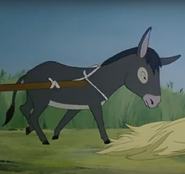 Benjamin (A slow but hard-working donkey, close friend of Boxer)

The Goat (Defender of the Animal Farm)

The Pigs (Henchmen of Napoleon)

The Sheep (Defenders of the Animal Farm)

The Horses (Main Enforcers of the Animal Farm)

The Cows (Main Enforcers of the Animal Farm)

The Hens (Defenders of the Animal Farm)

The Geese (Defenders of the Animal Farm)

The Dog (Former Defender of the Animal Farm, though it gave birth to several puppies, which in return they would be Napoleon's bodyguards)