Abracadaver (Al Lusion) was a magician who did a magic act in Townsville's old magic theater and was the mayor's role model, but then one night, he asked a little girl to come on stage and he made her teddy bear disappear into air. The girl was so sad the she accidentally pantsed him and made everyone see his tricks. He panicked and fell into a coffin with spikes and was killed. He came back as a zombie, but Blossom managed to kill him again.

Abracadaver was voiced by Frank Welker.

Having just returned from the dead, the Lich explores the new world he has found himself in. Still weakened from his eons-long slumber, the Lich wanders into a graveyard, and begins feeding on the souls of the dead to restore his lost strength. However, in the process, the undead sorcerer Abracadaver is accidentally resurrected. Can Abracadaver overpower the world’s oldest evil, or is he merely an opportunity for the Lich to reestablish his power?

His former name Al Lusion is a pun of "allusion" while his new name is a pun on "abracadabra" and "cadaver", which reffers to a corpse.

He can also be seen in the opening sequence. 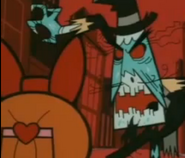 The Abracadaver as a zombie