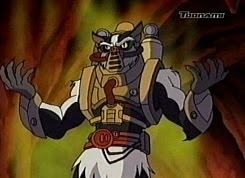 Stinkor is one of Skeletor's Evil Warriors and is a minor villain in the He-Man and the Masters of the Universe television series. He is a bit player in the second Disney Vs Non Disney Villains War.

During the Battle of the Forbidden Mountain, Stinkor attacks Mechanicles. He manages to destroy all of the inventor's lethal mechanical bugs with his stench. However, Mechanicles pulls a trick and slashes Stinkor's mask off. Stinkor is among the warriors captured at the very end of the battle.

Retrieved from "https://villainstournament.fandom.com/wiki/Stinkor?oldid=59137"
Community content is available under CC-BY-SA unless otherwise noted.