Introduction of the Snake Men

Wanting to show regret on the Snake Men's recent activities, Ursula brings upon to her faction, the last of the Titans, Cyclops, once controled by it's former ruler of Ursula's faction, Hades. Cyclops, however, falls in Ursula's mission to kill Ruber and his allies.

The Restoration of the Snake Mountain

In the later events, Ursula, seizing the power of the Philosopher's Stone, she uses it to restore the Snake Mountain into it's former glory. Their celebration is soon interupted by the arrival of another sorcerer, Khartoum, wanting the Philosopher Stone for himself. At first Khartoum blasts the sorcerer, only to be absorbed by the sorcerer's powers. Khartoum then grows in bigger size and fires his own blasts at Hiss. Hiss then promises Khartoum's death a slow and painfull one. Hiss then sends his shadows on a ceiling, where they drop debris on Khartoum's head. Khartoum then responds with another magic blast but Hiss shrugged it off. Hiss then teleports and uses his magic to transform Khartoum into a fearfull shrimp. The Evil King Hiss look with evil grins, as Khartoum is devoured by Ursula. 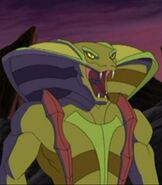