The Warriors of Skeletor are the troops of the overlord of evil in the long-time series of "He-Man: The Masters of the Universe" and they are major players in the villains tournaments.

Prior to events of the first war, Skeletor's orginal identity, Keldor, send his forces to the Archmage's kingdom, in order to obtain the Grimorium Arcanorum, a magic art, Keldor had desired to take it. Just as Trap Jaw, orginal identity, Kronis charge at Destane, the Archmage used a spell to drve the warrior out of the way. Keldor then fights the wizard with his master-sword abilities. Just as Keldor seems to be the winner of the battle, Destane throw to his face, a magical skull, which it melt much part of face, leaving his forces to retreat from the battle.

After their fight with Destane, Keldor and Evil Lyn take refuge to the tomb of Hordak, a defeated sorcerer from the past. Keldor orders Lyn to unlock the seal of the tomb, with her magic, so that Keldor would contact with the spirit of Hordak. While the power, that Lyn casts, was strongly enough, that knocks her unconcious for the time being, she succeeds to release the spirit of Hordak. Keldor pleases Hordak to restore him to his former glory. While Hordak warned him that it would cost him a prize, Keldor didin't care about his warning. Hordak then uses his powers to transform Keldor into a horriffying image of him. Evil Lyn, who recovers the hit, questions Hordak, about Keldor remnants. Hordak then answers that Keldor has perished and instead a new body has taken over him. He officialy names Keldor, now the overrlord of all evil, Skeletor. Upon seeing his new self, Skeletor laughs maniacally.

Two-Bad
Add a photo to this gallery 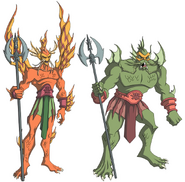 Beast Man's Shadow Beasts
Add a photo to this gallery 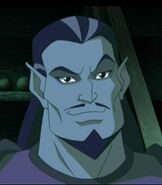 Keldor (The original identity of Skeletor)

Kronis (The original identity of Trap Jaw)
Add a photo to this gallery
Retrieved from "https://villainstournament.fandom.com/wiki/Skeletor%27s_Evil_Warriors?oldid=108999"
Community content is available under CC-BY-SA unless otherwise noted.