Senor Senior Sr was hired by Vlad Masters as a professor at Evile Academy. Prior to this, he fled Cuba after the rise of communism. Though he lost his wife during the escape, his job at Evile Academy was more than enough to provide for his newborn son. One day, while he was teaching a class, he overheard Professor Technus raging at his class over a failed test. Senior Sr attempted to calm Technus down but this only provoked Technus to call him an overly soft idiot. This spaked Drew Lipsky to fight Technus, furious over his favorite teacher being insulted. This resulted in a fire that shut Evile Academy down.

The Seniors are relaxing on their private island when they are approached by a group of dominant gangsters, the Gangreen Gang. Ace, the leader of the group, suggests an alliance with the Seniors. Senor Senior Sr., however, finds the Gang's appearance and demeanor repulsive; he rejects the alliance on principle. Enraged, the Gangreen Gang hires Fuzzy Lumpkins to kill the Seniors. Though the Seniors take the edge initially, shooting Lumpkins with their laser cannons, Lumpkins lays waste to their base with his shotgun. Fuzzy Lumpkins grows enraged, contorting his body into a fearsome new form. Senior Sr., however, finds an upper hand. He unleashes a massive top, knocking Lumpkins unconscious.

A Group of Super Criminals

The Fire Nation begins expanding at a rapid rate; since his private island is perilously close to recently conquered territory, Senor Senior Sr. calls together a group of supervillains - Duff Killigan, DNAmy, Monkey Fist, and, most notably, Shego - to defend his territory. Shego suggests that Monkey Fist and his protege, Fukushima, spy on Fire Nation military bases. The two agree, though Fukushima is killed in an attack from the Combustion Man.

Monkey Fist discovers a cluster of Monkey Stones, power sources that may yet prove useful to Senor Senior Sr.'s cause. Senor Senior Sr. decides to send his son out to acquire the artifacts. However, Vlad Plasmius also arrives to take the Monkey Stones and handily defeats Senior Jr. Though Senior Sr. is certainly upset, he ultimately cares more for his son's well-being.

Senor Senor Sr. and the rest of his alliance travels to the Fire Nation base to assassinate Princess Azula. The Senors blast through the walls, giving the alliance an opening. When Ty Lee and Mai proves larger annoyances than the Senors expect, Senior Jr. suggests that they kill their enemies. Senior Sr., however, deems such behavior below true villainy. Instead, he uses the laser to knock the two Firebenders into a river. The Seniors later transport the faction away, once Shego dies in combat against Azula. 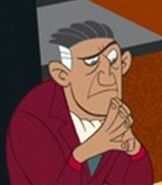 Senor Senior Senior in the anime

Add a photo to this gallery
Retrieved from "https://villainstournament.fandom.com/wiki/Senor_Senior_Senior?oldid=103721"
Community content is available under CC-BY-SA unless otherwise noted.