Senor Senior Jr. is a minor antagonist in the Disney animated series, Kim Possible, and a minor player in the second Disney vs Non Disney Villains War. He is smug and conceited, but he is not truly villainous; most of the time, he is only conforming to the wishes of his father, Senor Senior Sr.

Junior and his father meet the Gangreen Gang after the latter arrives at their private island. Throughout the meeting, Junior is bored, while his father rebuffs the gang for their appearance and demeanor. The situation changes when the Gang hires Fuzzy Lumpkins to kill the two. Junior activates the island's laser cannons to defeat Fuzzy, but the monster destroys them after being briefly stunned. Junior waits out the rest of the battle, letting his father eliminate the threat.

Though Senor Senior Jr. seems more enticed by the drama of the situation, he joins his father's new faction of supervillains devoted to stalling the expansion of the Fire Nation.

After Monkey Fist discovers the Monkey Stones, Senor Senior Sr. needs someone to steal them for the alliance. He volunteers Junior, who thoroughly dislikes the task. Nonetheless, Junior and a platoon of fellow thieves make their way to the Stones' location. Awaiting them is Vlad Plasmius, also after the Stones. Junior threatens Vlad with a ray gun, but Vlad deflects the blast. Junior catches Plasmius off guard with a second shot. But Plasmius has another trick up his sleeve: making clones of himself. As the clones take out Junior's men, the playboy turns tail and runs.

Senor Jr. and his father blast down the walls of the Fire Nation as part of an attack commissioned by David Xanatos. When Ty Lee and Mai prove troublesome, Senior Jr. suggests that he and his father blast them with a laser. Senor Sr. reprimands his son for such lowbrow villainy, instead knocking the two into a river. When Shego dies in combat against Princess Azula, Jr. mourns her passing. All the while, Senor Senior Sr. transports the alliance away. 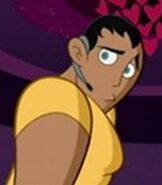 Senor Senior Junior in the anime