Queen La is the primary antagonist of the Tarzan animated television series. A sexy, gifted sorceress and warrior, she is a secondary player in the second Disney vs Non Disney Villains War.

Anansi never considerd humans equal to Oberati. He did for a brief time, but one thing led to another. Anansi ruled over his territory in Africa. His subjects would bring him food and serve his wishes. Those who didn't, would spend their lives as panthers. Anansi only held a high opinion to one human, a woman named Ameena that lived in his village. He couldn't help but harbor an inexplicable attraction to her. He'd rather not say he was in love, but he eventually figured there was no harm in taking the form of an attractive human and talking to her. The two started a relationship and before long, were married. They soon had a child together that they named La. In the midst of the night, a pack of ravenous leopards snuck into the village looking for a meal. A scream of horror echoed as one leopard tried to carry the infant La away in its jaws. Strangely, the cats didn't get far before an enigmatic magic killed them all, La remained unscathed.

An incredibly confused Ameena demanded an explanation from her husband, who promptly forced the truth out of himself, that he was, in fact, Anansi, meaning La was a half-fae. Despite being alarmed, Ameena didn't care, and promised she'd carry on loving Anansi and La. However, word and rumors spread throughout the village. The idea of a mere human in love with their idol of worship was heresy. An angry mob soon formed in search of the blasphemous harlot. A large group of the village people found Ameena, and stoned her to death.

Anansi was enraged. Returning to his spider form, he furiously ordered the guilty party before him. Using his magic, he promptly cursed the murderers to an eternity as leopard men. It was then Anansi decided humans were dangerous, and La was not safe among them. He ordered the Leopard Men to build a new city that they would name Opar. The Leopard Men were then condemned to spend the rest of their days watching over and caring for La, who Anansi made Queen of his new city.

La grew up into a beautiful young woman, but realized that, unlike her father, she was only mortal. She perfected a magic that allowed her to live off of the life force of others and channeled it into her staff. La now has goals of living forever and becoming a goddess.

An Alliance is Born

Queen La first appears in response to the summons of the Skeleton King. After the king offers an alliance, the beautiful queen accepts, seeing in the Skeleton King a powerful friend. La wields her newfound power with impunity, hiring the vicious Tiburon to eliminate the demon sorcerer, Drago. Though Tiburon objects to the task, he commits to it after La supplies him with a replica of Ursula's trident. Tiburon fails in his task, however. Nonetheless, La is soon able to secure the loyalties of Mojo Jojo, Mandarin, Valina, Vlad Plasmius, Technus, Jack Spicer, Wuya, and Norton Nimnul.

Queen La discovers the existence of the Monkey Stones, artifacts of untold power. She delegates the task of stealing them to Vlad Plasmius. Fortunately for her, Plasmius succeeds after a small bout with Senor Senior Jr.

VS Hecate and Devimon

Devimon and Hecate attack La's fortress in hopes of stealing a power crystal. Le refuses to back down, and blasts a hole right through Devimon's chest. He survives the blow, ans is able to retaliate and defeat La. Unfortunately, Hecate is also succesful in stealing the Skeleton King's power crystal, much to La's annoyance.

Queen La then participates in a battle when the newly empowered Drago emerges. Hoping to anticipate the demon's attack, Queen La strikes first. Drago simply emits a sonic blast, knocking La down; he spends the rest of his time killing her leopard-men henchmen. La recovers and throws her shield at her adversary, though she only manages to stun him. She fires several energy blasts from her staff, but Drago's wings deflect the blasts. For a time, all appears lost for La. But Shendu, Drago's father, arrives, catching Drago off guard. La takes the opportunity to open a portal to Hell, a portal into which Drago promptly falls. Shendu then allies with La and the Skeleton King, hoping to use their resources to conquer China. He then turns all of the Dark Hand's rescorces over to La, much to Valmont's annoyance.

Death at the Battle of San Francisco

Karai and her forces attack La's new base with the help of the Shredder, but La is ready for them. She sends her forces into battle, but they are destroyed by a magic crystal attached to Shredder's helmet. She blasts the martial artist with energy from her staff but fails to kill him. La then attacks Karai with her staff, but Karai dodges, causing La to smash her staff on the ground. With her magics undone, La crumbles into dust.

Searching the world for sorcerers willing to serve Maleficent, Yzma first approached Queen La, ruler of the jungle-dwelling leopard-men. Yzma was considering bringing La into the ranks when the meeting was interrupted by the undead mage Ayam Aghoul, who claimed his victory over Hecate in the First War made him a more suitable candidate. La challenged him to prove her worth, but Aghoul used his exploding skulls to destroy La's leopard-men. Stepping into the fray, La briefly stunned Aghoul with a blast from her staff, but he recovered and drenched her with a bolt of water. La made to attack again, but Aghoul swiftly destroyed La's staff, removing the source of her power. La crumbled away to dust, and Yzma reluctantly made Aghoul the first of her partners.

As Queen La's soul arrived in the Underworld, she approached Hades and Mirage, begging them to allow her to return to the mortal world. The two gods refused, not seeing any benefit for them. La let slip that Maleficent had returned, hoping to use this information as a bargaining chip, much to Hades' shock and horror.

An ally of Mirage

Deep in the Underworld, Mirage called together her allies, including Queen La, Chang, and the revived Hecate, revealing her plot to dominate the world of mortals using the power of the demonic Dark Dragon, though Hades was less than enthusiastic after his confrontation with Maleficent.

With the Sorcerers' Society assembled, Maleficent gave the group their first mission: an assault on the Underworld and the destruction of Mirage's forces. When Mirage asked how the Society managed to get into the realm of the dead, Yzma and Kronk confessed they had no idea, but that didn't deter them from their task. Hecate, Queen La, and Chang, taking the form of a dragon, moved in to defend Mirage, who summoned a gigantic crystal monster to aid them. The monster scored the first hit, knocking Yzma into the mud. Queen La managed to knock out Mozenrath with a blast from her staff, as Ayam Aghoul managed to keep Chang at bay with his bombs. As the crystal monster made to attack again, Madame Mim transformed herself into a rhino and shattered it with a charge, spraying flames all over the throne room. La made to finish off Mozenrath, but he seized some sand from the River Styx and blew it in her face, causing her to fall into dust once again.

Jane encountered a wounded animal and tried to help it. But it turned out the animal was possessed by the spirit of Queen La who then proceeded to posses Jane.

After so long, Medusa decides to test Crona's power's deep in the jungle where a powerful sorceress resides. Unfortunately for the Leopard Man they are interrupted in their sacrifice, Crona release the Black Blood and use his powers to fight most of the Leopard Man. While they are big in numbers Crona seems to have the upper hand, but things can get more intense if Queen La joins the fight...

Meanwhile Queen La gets the visit from an old ally fearing that the Kishian could break free aids La to stop from anyone who tries to free him.

Misty has heard that Ash Ketchum is alive in the live action universe, and decides to go find him. But at the same time, as she enters a mysterious lair, she encounters the leopard sorceress, Queen La, and decides to knock her down hoping to escape. And Misty knows just what tools to use in order to do so.

Jafar informs of the ongoing situation of the war to Queen La, Mozenrath and Azula regards their friends. However, the Tracker tries to ambush them from orders of Prince Phobos and interrupts them as Queen La prepares to fight him. However she may have underestimated as her husband prepares to help, alongside her son and his girlfriend.

While running from Mirage, Vitani meet with Queen La (a former prisoner of Mirage) and they decide to join forces and defeat Mirage for what she done to them. 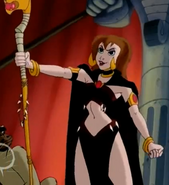