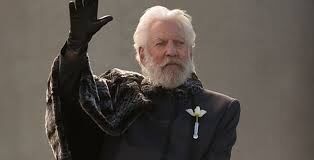 President Coriolanus Snow is the tyrannical president of Panem, and the primary antagonist of The Hunger Games franchise. He is a major player in the third Disney Vs Non Disney Villains war.

An Encounter With Magic

With a war approaching, President Snow delivers a speech to the people of the Capitol. Unfortunately, he is interrupted by an attack from Voldemort and his Death Eaters, who proceed to spread chaos and destruction, sending the citizens into a panic as Snow looks on in horror. However, Regina soon arrives, having been searching for the One Ring, and engages Voldemort in a wizard's duel. After witnessing the destruction caused by their battle, Snow decides to intervene, sending in his Peacekeepers to break it up. With Snow's troops outnumbering the Death Eaters, Voldemort is forced to retreat, with Snow giving the dark lord a mocking salute as he departs.

Recognizing the threat posed by the magical forces, Snow decides to start gathering support in preparation for the coming war. To this end, Snow holds a party in the presidential palace to unite his allies, inviting several powerful business-people such as Zorg, Cruella de Vil, and Dr. Claw, and his newer subordinates such as Henry Burke and Dr. Frankenstein.

However, Snow is soon caught off guard by the emerging threat of the vampire king Russell Edgington, who goes on live TV and announces his plans for the vampires to exterminate humanity and dominate the Earth. Horrified, Snow begins mobilizing his forces to strike against the vampires, beginning by having Frankenstein transform the petrified remains of the Evil Genius into Snow's personal bodyguard, Sark. Sark quickly impresses Snow, capturing the superhuman serial killer known as Sylar.

Hitting Where it Hurts

Determined to strike a decisive blow against Edgington, Snow sends out Burke and Commander Thread to attack Russell's mansion, while hosting a party at the Capitol in hopes of luring out the vampire king. Snow's gambit works, as Edgington takes the bait and attacks the party, massacring the guests alongside the newly revived Pinhead. Snow then broadcasts a message to Edgington, cryptically telling him that "it's the things we love most that destroy us", while simultaneously having his men stationed at the mansion murder Russell's lover, Talbot. Stricken with grief and fear as he realizes what Snow has done, Russell flees back to his mansion, leaving Snow the victor.

Retrieved from "https://villainstournament.fandom.com/wiki/President_Snow?oldid=118661"
Community content is available under CC-BY-SA unless otherwise noted.