Poison Ivy (real name Pamela Isley) is a recurring antagonist in the DC universe, first appearing in the Batman #181 comic strip. A former botanist, working under professor Jason Woodrue, Poison Ivy gained super-powers, resulted by an incident at her own laboratory. She has the power to control over nature and plant beings, though her attribution and devotion on mother nature made her insane and deranged, while also vengeful against anyone who would harass nature, making her a deadly threat to Batman, and other super-heroes. She appears as an official member to many villainous organizations, including the Injustice League, the Injustice Gang, the Suicide Squad, and various others. She is also a secondary player in the Non-Disney vs. DC Villains War.

Vs the Gangreen Gang

At some point in time, Poison Ivy, and her fellow partner, Harley Quinn, challenge the Gangreen Gang, as their antics constantly bother the two women. At first glance, the Gangreen Gang mocks the women, only for Harley Quinn and Poison Ivy to reveal their skills and abilities, besting every single member of the gang, save only Ace for last. Before Ace would even react, Poison Ivy knocks out the Gang's leader with a powerful punch, taking him out easily.

The Trio of Villainesses

Later, Harley Quinn, Poison Ivy, and their new addition, the Livewire, meet at an iceberg lounge, disccusing about the control of the criminal empire to their own hands.

Joker introduces himself to Harley Quinn and Poison Ivy as the new boss of the underworld and would like them to steal some of Cruella's last money on his behalf, Ivy at first doesn't trust the Clown so much, but when he promises to give a good chunk of the profit the two criminals are convinced.Then the two evil crime ladies enter the place where the money is deposited, Madame Medusa's pawn shop, Harley manages to be stealthy enough to avoid luring the hysterical woman through the alarms, but Ivy is more impulsive and attracts the attention of Medusa who wants to stop them, but is momentarily neutralized, but just at that moment Cruella was passing by and when she sees the two criminals she understands their intentions and begins, together with Medusa, to chase them with the car.

Meanwhile in Gotham City, the Joker gathers new allies for his uprising in war.Joker sends Poison Ivy on an important task.

Poison Ivy finally tracks down the threat that she has to take out for the Joker. The threat is none other than Bushroot, who was sent by Negaduck to go and recruit new allies against Joker (because he heard that Livewire survived and joined him). Who will win between these two plant lovers and plant manipulators? 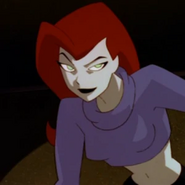 Poison Ivy in the CGI Universe
Community content is available under CC-BY-SA unless otherwise noted.
Advertisement