Start a Wiki
Phantomon is a minor antagonist from the anime series Digimon. A Ghost Digimon, whose name and design are derived from the mythological terms Phantom and Grim Reaper, respectively, Phantomon usually serves as the Coachman of Myotismon's wagon, transporting him wherever Myotismon decides. He makes a brief appearance in the second Disney vs. Non-Disney Villains War.

Phantomon is briefly featured in the Finale of the war, as he drove his cart, containing Myotismon inside, to Bald Mountain, for his master's battle, against the Acolytes. He does not make another appearance, afterwards. 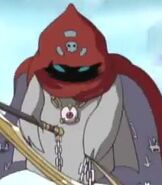 Add a photo to this gallery
Retrieved from "https://villainstournament.fandom.com/wiki/Phantomon?oldid=95154"
Community content is available under CC-BY-SA unless otherwise noted.