View source
watch 01:54
Obi-Wan Finale - The Loop
Do you like this video?
Play Sound

The One-Eyes are a race of humanoid demon warriors, lead by the ruthless commander, King One-Eye. They appear as the secondary villains in the animated film, The Thief and the Cobbler. A group of fearsome warriors, sought to destroy and conquer any kingdom they would decide. The One-Eyes are heavily featured in the villains wars.

Originally humans, King One-Eye assumes the form of demon warmonger, when Eris rips out his eye, in order to save Pharaoh Rameses. Lustful for vengeance, King One-Eye builts a massive army, in which all of his soldiers are identical to him.

When the time has eventually come, King One-Eye sends his trusted adviser to negotiate with Rameses, hoping that he would ally with the ruler of Egypt. This attempt fails, as Rameses refuses to let the One-Eyes live on his empire, especially since he the pharaoh had a traumatic childhood with the demon race. King One-Eye then promises that he would take Egypt by force, though aquiring enough warriors and power. He, thus, recruits the shaman, Tzekel Kan, the latter being humiliated by the Egyptian forces. In addition, he takes the Goblin Alliance, comprised by Prince Froglip and Queen Gnorga, to his aid.

Despite his overgrowing army, King One-Eye's era comes to an end, when Ruber, backed up by Eris, invade the empire of the One-Eyes. At first, the One-Eye sends Zigzag to deal with the knight, only to be knocked out in a pit. One-Eye then steps in the fray by bashing Ruber with a massive weight. He then grabs a mace, hoping that it would crush the knight's head. To One-Eye' surprise, Ruber catches the mace and toss it. The demon king has barely enough time to scream, as Ruber plummets the One-Eye from a cliff to his apparent demise. On the other side, the Goblin Alliance stand up against Eris. However, the goddess assumes the form of a soldier, distracting long enough the goblin prince, so that she would creep from behind and knock him off from a cliff, sharing the same fate with the One-Eye. An outraged Gnorga then steps in the fray, only to be turned into a rosebuss by the goddess' abilities. Eris then summons a tornado, that sucks Gnorga to parts unknown. With all of his allies defeated, the last of the One-Eyes, Tzekel Kan settles down and joins Eris' faction, even though she was his original enemy at the first place.

One-Eye sends Zigzag, his negotiator, on Egypt, ruled by Pharaoh Rameses, in a proposal to join forces. Rameses reluctantly accepts his offer, through Zigzag, having suffered a great loss, against the Atlantean fleet, led by the Ocean Master.

An Offer from a Sorceress

Spending their time outside of the warfare that follows, the One-Eye warriors bring before One-Eye himself, two emissaries, Zigzag and Ommadon, sent by Maleficent to recruit the One-Eye into their services. with One-Eye agreeing to their offering. 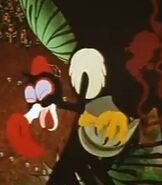 Prince Froglip (Prince of the Goblins, Partner of Queen Gnorga, and Member of the One-Eyes)

Goblin King (Father of Prince Froglip, Husband of the Goblin Queen, Second Commander of the Goblins, and, Possibly, Member of the One-Eyes)

Goblin Queen (Mother of Prince Froglip, Wife of the Goblin King, Second Commander of the Goblins, and Possibly, Member of the One-Eyes)