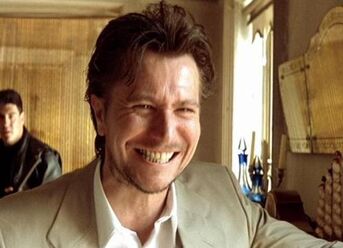 Norman Stansfield is the primary antagonist of the action film, Leon: The Professional. A dirty cop with a severe drug addiction, Stansfield is a major player in the Non Disney Villains Tournament.

A man named Anton Chigurh approaches Stansfield in broad daylight, announcing that he intends to kill the corrupt cop. Stansfield insults the bounty hunter to his face. Later that night, Stansfield fires upon Chigurh as he is walking down the street, injuring his foe. But Chigurh is unfazed; he tracks down Stansfield to his hotel room and shoots his way in. A firefight ensues, in which Chigurh shoots Stansfield in the shoulder. Wounded, Stansfield retreats to the bathroom. Chigurh follows, failing to check the corners. Stansfield emerges from behind the bathroom door and guns him down.

Jim Moriarty reveals himself as the one who hired Chigurh; even worse, the young criminal vows to eliminate Stansfield yet. Determined to bring Moriarty down, Stansfield makes an alliance with a criminal far more dangerous than himself: Hannibal Lecter. He adds Stansfield to a small faction of criminals he has assembled, including Sylar and Chase Collins. He then induces Zorg and Rotti Largo to back him financially, in exchange for protecting their interests.

Stansfield strikes up a relationship with a mysterious woman named Irene Adler, although Dr. Lecter disapproves of the match. Stansfield soon becomes jealous of Lecter, who seems to know Adler from somewhere. Adler then puts that rage to "good use," accusing Lecter of planning to kill Stansfield. Furious, Stansfield executes Hannibal on the spot.