Nekron's Army is the small, but immense and powerfull, army of the ice lord, Nekron, and the malevolent sorceress, Queen Juliana. Originated from the Ralph Bakshi's feature, Fire and Ice, the army of Nekron plays an efficient role in the villains tournaments.

In this war, Nekron's Army is part of the Ice Nation's massive army. Most of it's information can be found here.

Queen Juliana (Mother of Nekron, Co-Leader)
Add a photo to this gallery

Nekron's Glaciers (Ice Constructions, bent on Nekron's will)
Add a photo to this gallery

Sergeant Quartermaine (Captain of the Subhumans) 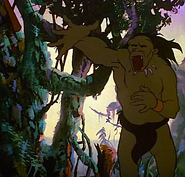 Vineclimber (Elite Soldier)
Add a photo to this gallery
Retrieved from "https://villainstournament.fandom.com/wiki/Nekron%27s_Army?oldid=120476"
Community content is available under CC-BY-SA unless otherwise noted.