Disney Versus Non-Disney Villains Wiki
Register
Don't have an account?
Sign In
Advertisement
in: Factions, Team Villains, Organization,
and 13 more

The National Crows Party is an organization, formed by Dolf. A dictatorial society of animals, serving as an allusion to the real life radical political parties, notably Nazism and Fascism. In fact, the organization was either based on the National Fascist Party, a political group with the same intentions, ideals, and movements as the latter. First appear in the Dutch television series Alfred J. Kwak, the National Crows Party plays an efficient role in the Non-Disney Villains Tournament.

The Beginning of a New Era

After Napoleon's downfall, Dolf, one of Napoleon's previous allies, takes control of the remain army of the communist pig and also most of the animals, found across the globe. He, thus, becomes the dictator of the Animal Farm and the emperor of his own faction, the National Crows Party.

In the later events, Dolf invites the wizard, Blackwolf, learning of his recent victory against the Blue Meanies. He persuades the sorcerer to combine their armies, for the perfect vision of their society. Interested, Blackwolf agrees to the bird's offer. Together, the two resurrect a fallen T-Rex, named Sharptooth, and send him loose on Robotropolis. The dinosaur, however, fails once more to the doctors, Robotnik and Snively,respectively. Despite Sharptooth's demise, Dolf is, as this fight was all according to his plann. Specifically, Snively, tired of his uncle rule, joins the National Crows Party, with the young boy planning to destroy the empire of Robotnik and remake it as Snivelopolis.

A Loss of a Friend

As soon as the meeting, between Dolf and Snively, ends, Dolf confronts Brain and Pinky, two members of the Animal Farm, and instructs Brain to assist him in a meeting point. Pinky, however, fearing for Brain's safety, pleads to his partner to refuse at his offer. Brain, however, not wanting to feel humiliated in front of Dolf, rebuffs Pinky and hurts his feelings, a grave mistake he would make. Soon enough, an unexpected guest arrives, as Zero demands to Dolf to surrender the territories of the Animal Farm to him. Learning of Zero's previous humiliation at the hands of Cobra Commander, Dolf refures and spurns him. Zero then begins a demonstration, as he shows to Dolf and his National Crows Army, his airships, targeting at Dolf's location. Zero then orders to drop a missile at a laboratory of Dolf, blowing it up, killing Pinky in the process, who had remained behind, much to Brain's lament.

In the later events, Dolf progress through his next phase of plans, as he unviels to his allies, their new enemy and leader of the United States of America, Cobra Commander. The bird dictator then heads off to New York, hoping to manipulate Cobra to serve him. There, he is greeted by the New York's citizens and his animal followers, with the people exclaiming loudly the National Crows Party's line, "DOLF IS JUSTICE".

Meanwhile, Cat R. Waul, a represantative of the Animal Farm, orders some of the troops of Dolf to arrest Rupee, as he had enough with the mouthful turkey. Before Rupee would run, the troops of Dolf capture him and bring him to Dolf's jail.

Elsewhere, During a conference with Cobra Commander, Dolf recieves a message from Blackwolf, stating his betrayal nature to his partner and his attack by the mutant army in the borders of New York, much to Dolf's anger. Cobra Commander then orders to Dolf to fix the errors, his ally caused, if he wanted to keep his trustiness with the American Leader. Dolf then contacts with Blackwolf, claiming that he would pay for his insolance. Though, Blackwolf ignores his warning, he is caught off guard, when Snively unleashes one of his secret weapons Blackwolf, killing the mutant leader in the process. At that time, Dolf arrives and congratulates Snively for his accomplishment.

With the mutant army defeated, Flogg, the adopted son of Blackwolf, makes a peacefull contract with Dolf and the National Crows Party, stating that he would give up several territories to the bird dictator, as long as they would keep them out of danger. Dolf agrees to his terms, stating that "justice" must work, as long as all the citizens have a happyl life and not posing as threats to the country.

Dolf (Founder and Leader of the National Crows Party)

Dolf (Founder and Leader of the National Crows Party) 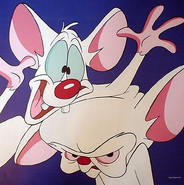 Pinky and The Brain 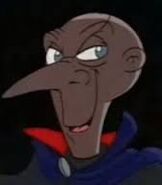