Myotismon, known as Vamdemon in the Japanese version, is one of the major antagonists in the anime Digimon. He is perhaps the most evil villain in the franchise, and if a "main villain" for the entire first two seasons can be named, it would be Myotismon. He is a minor player in the second Disney Vs Non Disney Villains War.

Myotismon frees the Snow Queen from her prison with his powerful magic. It is then revealed the villain is one of Oberon's Anti-Acolytes, devoted to preventing Chernabog from returning to the earth. Soon after the Snow Queen decides to join him in his task.

The Battle of Bald Mountain

Myotismon emerges in the Non Disney Tournament as the protege of Dracula, leader of the Legion of Darkness. When Dracula and his associate, Professor Moriarty, decide to embark upon a mission to the live-action universe, they leave Myotismon in charge of the alliance. But, before he goes, Dracula wants to ensure that Myotismon is up to the task. He thus pits Myotismon against Lord Darkar. Darkar attacks first, stunning Myotismon with some dark magic. Myotismon fires back, only for Darkar to block the blast. Darkar unleashes his full onslaught, enveloping Myotismon in a massive explosion. Myotismon flies out of the cloud of dust and beats Darkar mercilessly with his dark whip. Darkar flees rather than fight a losing battle.

Myotismon, capitalizing upon Dracula's departure, adds Devimon to the Legion of Darkness as an enforcer. When Vlad Plasmius, one of the more intractable members of the Legion, attacks Professor Moriarty, Myotismon decides to eliminate the traitor. He and Devimon track Plasmius down and prepare to destroy him. Plasmius fires several shots at the two Digimon in his desperation, but both Myotismon and Devimon shrug off the blows. Myotismon manages to reflect Plasmius's shot back at him, affording Devimon enough time to strip Plasmius of his powers and capture him.

Myotismon decides to have the Grand Duke of Owls retrieve the second half of a powerful amulet and destroy it, knowing full well that it is in the possession of Professor Screweyes. The Grand Duke fails in his task, angering Myotismon considerably. Meanwhile, Myotismon brings Charles zi Britannia into the fold, the one man who can make "Project Ragnarok" - the grand scheme of the Legion of Darkness - a reality.

While busy planning the intricacies of Project Ragnarok, Myotismon finds an interruption in Nergal, who attacks him with magical tentacles and energy attacks. Myotismon manages to shield himself from both. Right when Myotismon is about to strike Nergal down, Discord enters his lair and begins causing chaos. Myotismon tries to turn his attention to the new foe, but Nergal hits him from behind with an electrified tentacle. Nergal then opens up the shades of Myotismon's lair, blinding the vampire with light. Discord then attacks with some energy blasts, but Myotismon manages to block them. With a timely spell, Myotismon is able to knock Nergal away. Yet more trouble arrives when Him joins the fray on the side of Nergal and Discord. Both Him and Discord trap Myotismon in two crossing beams of energy, blasting the vampire through a building. Myotismon miraculously survives, frightening the Triumvirate of Terror. They all flee, to Myotismon's fury.

Myotismon happens upon an injured Holli Would; inspired by her lust for vengeance against Kent Mansley, Myotismon turns her into a vampire. While this is happening, the Grand Duke of Owls resurrects an old ally, Nightmare Moon, and kills Devimon. Distraught by the loss of his friend, Myotismon makes contact with Dracula. Myotismon then learns that this internal strife in the Legion is all according to plan; the only important thing is that Charles zi Britannia remains loyal. Myotismon, content, awaits his master's return to the animated universe. 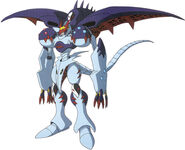 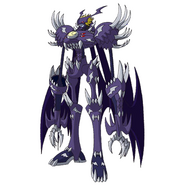