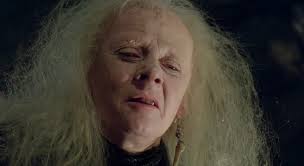 Mortianna is the secondary villain of the film, Robin Hood: Prince of Thieves. The witch-like advisor to the Sheriff of Nottingham, she is a minor player in the second Disney Vs Non Disney Villains War.

Mortianna joins up with the Evil Genius, also working to convince the Sheriff to make a similar decision. When Cardinal Richelieu and Rochefort arrive to question the Sheriff's intention, both he and Mortianna attack. Mortianna lunges at the cardinal with a sword, but he shoots and kills her.

Retrieved from "https://villainstournament.fandom.com/wiki/Mortianna?oldid=39031"
Community content is available under CC-BY-SA unless otherwise noted.