Marcus Octavius (Lesser ruler of New York City and "Highlander" warrior, former lieutenant, and former leader of his own faction, combined forces with those of Emperor Zurg's met his end indirectly by Kent Mansley who cut off his head, terminating the "Highlander" effect)

Shan Yu (Lord of the Huns, former lieutenant of Marcus Octavius, and later of Emperor Zurg, turned allegiance to Frollo after the battle of the Holy Land, buried in snow in battle of Bald Mountain, emerged and joined forces with Pete at the end of the first war)

Kent Mansley (Former agent of Cobra Bubbles, and former member of Marcus' and Zurg's factions respectively, joined up with the Illuminati on Helga Sinclair's suggestion, turned against Marcus by cutting off his head, indirectly saving the heroes, reassigned by Cobra Bubbles to work in his agency)

Lieutenant Helga Sinclair (Lieutenant and henchwoman of Rourke, former member of Marcus and Zurg's factions respectively, went into hiding after battle at Marcus' Base, made an unholy partnership with Kent Mansley, spend the end of the war in hiding)
Add a photo to this gallery

Kyala (Servant of Marcus Octavius, killed in an aircraft accident, caused by the interference of Mira Nova) 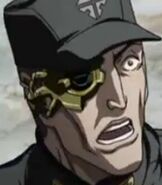 Marcus' Sergeant (Loyal officer of Marcus Octavius, most likely killed by the Galactic Federation's forces in battle of the Holy Land)

Marcus Octavius' Troops (Primary soldiers and weapons of Marcus Octavius, most slain or destroyed by the Galactic Federation's forces in battle of the Holy Land)

Hayabusa the Falcon (Pet-sidekick of Shan-Yu, revealed to have survived the battle of Bald Mountain, standing on Shan-Yu's side, with his master joining forces with Pete in the aftermath)

The Hun Army (Primary army of Shan-Yu, most buried in the snow avalance, triggered by the Thief's actions in battle of Bald Mountain)

Elite Hun Soldiers (Elite group of Hun soldiers, serving Shan-Yu, revealed to be the lone survivors of the Hun army, after it's defeat on Bald Mountain, joined forces with Pete by the end of the war)

General Rogard (General of the United States of America, and a subordinate of Kent Mansley, fate unknown after initial appearance)

U.S. Military (Army of the United States, under the control of Kent Mansley and General Rogard, partially working with Marcus' army, most defeated by the Galactic Federation's forces in battle of the Holy Land, fate unknown after first war)

Retrieved from "https://villainstournament.fandom.com/wiki/Marcus%27_Alliance?oldid=111445"
Community content is available under CC-BY-SA unless otherwise noted.