The Manhattan Clan is a clan of gargoyles, residing in the city of Manhattan. Led by Goliath, the clan has occassionaly saved the day from various adversaries, most commonly examples are coming in the form of David Xanatos and his enterprises. Originally featured from the television series, Gargoyles, the clan plays an efficient role in the second Disney Heroes vs. Villains War. The clan also appears in the second Disney vs. Non-Disney Villains War, in a flashback scene of Coldstone. 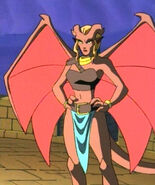 Elisa Maza
Add a photo to this gallery
Retrieved from "https://villainstournament.fandom.com/wiki/Manhattan_Clan?oldid=116675"
Community content is available under CC-BY-SA unless otherwise noted.