Luigi is the younger twin brother of the widely more famous Mario. The so-called king of second bananas Luigi lacks self-confidence and is somewhat cowardly, due to not being as recognized as his brother. But despite all of this, Luigi is capable of being just as great as his brother and can even excel at some things (keyword being some) for exp. rescuing his bro (and probably many others) from king boo(what makes this even more impressive is that Luigi is afraid of ghosts)

He, alongside his brother, will appear in the Worst Heroes and Villains War Ever. 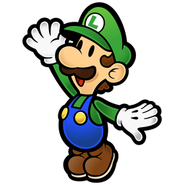 In the Mario And Luigi Games

And who could forget the cartoon verson?("That's Mama Luigi too you Mario.*wheze*"
Community content is available under CC-BY-SA unless otherwise noted.
Advertisement