Livewire (aka Leslie Willis) is an electrokinetic enemy of Superman, first appearing in WB's Superman: The Animated Series before gaining enough notoriety to cross over into the mainstream Superman comics. A former radio shock jock who made a living antagonizing the Man of Steel, she gained electric powers after being struck by lightning during a rock concert in her honor. Blaming Superman, she set out to get revenge. She first appears in the first episode of Non-Disney vs. DC Villains War.

Livewire first appears in the fifth fight of the series, attacking a mine where Lex Luthor has been mining Kryptonite, keen on getting her hands on the radioactive mineral for her own vendetta against Superman. She attacks and kills the miners in her way, but her powers interact with the kryptonite in such a way to give one of the miners among them Jefferson, Tyler, regenerative abilities. Taking advantage of Livewire's surprise, Tyler uses a jackhammer to bust open a water main, spraying Livewire with a stream of water which causes her to short-circuit. Intrigued by Tyler's powers and ruthlessness, Livewire's employer Mok Swagger reveals himself and takes Tyler on as a new lackey, leaving Livewire behind.

Prior to her employment with Mok, Livewire was a partner of Harley Quinn, and Poison Ivy, desiring to take control of the criminal empire into their own hands.

Maleficent is arguing with her army when suddenly Livewire arrives and starts using her power creating a lot of disorder, will the lady of all evil be able to stop the electric woman?

Joker recruits Hugo Strange to replace the Penguin now disappeared. However they are interrupted by Harley Quinn, who recruited a new ally to help her pudding, but a thought to be dead villain makes her appearance, joining the clown's faction. 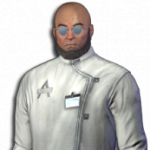