Member of the Bakshi Bunch (as for Heroes Vs Villains War)

Larry the Lizard is the small green reptile mutant and the obedient minion of the wizard, Blackwolf and the redeemed villain in the animated film "Wizards". Larry makes a cameo appearance in Animated Vs Video Game Villains War and Heroes Vs Villains War.

When Maleficent travels to the Video Game world, she sends an image of herself in the animated world, learning that it would be difficult for returning into her original dimension. There her image confronts Blackwolf and the mutant, Larry and proposes to them to keep the Forbidden Mountains safe from any intruders. Blackwolf agrees isntantly. This was the only shot that Larry makes a cameo appearance, as he was not seen again in the later fights of the war.

Larry appears as one of the members of the Bakshi Bunch, that have allied with the Horned King's faction. After Necron 99 assasignated the President (Wizards), Larry, seeing the results of the fight by a computer, informs both Blackwolf and the Horned King about Necron's recent victory against the President.

The Fusion of the Horned King's and Maleficent's Forces

When the dark fairy, Maleficent intecertps the Horned King's castle and proposes to the Horned King and his forces an alliance with her and her allies to take down the heroes, Larry appears along with Blackwolf as they were interested, listening to her offer. 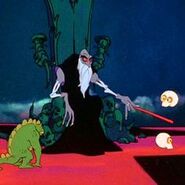 Add a photo to this gallery
Retrieved from "https://villainstournament.fandom.com/wiki/Larry_the_Lizard?oldid=120089"
Community content is available under CC-BY-SA unless otherwise noted.