Kefka Palazzo is the primary antagonist of the video game Final Fantasy VI. A psychotic magic-infused jester, Kefka has become notorious as one of the greatest video game villains in the history of the medium. While some critics have accused Kefka of being a rip-off of the Joker, others praise him for his depth of insanity, clearly illustrated by his multiple genocidal acts and boss theme, "Dancing Mad." He has appeared prominently in two spin-off tournaments, as a secondary player in Animated v. Video Game Villains War and a major player in Video Game Villains War.

Diablo, the monstrous demon from Hell, takes over the kingdom of heaven in the early stages of the war. Kefka, wanting Heaven as a vantage point for launching attacks on Earth, contests the monster's rule. Diablo wounds Kefka early on, despite the jester's magic, putting the clown temporarily out of commission. Fortunately for Kefka, Judge Gabranth arrives and stuns Diablo briefly. While the demon distracts himself, Kefka launches a salvo of lethal spells at Diablo, sending the demon plummeting from Heaven.

Kefka meets up with the other Warriors of Chaos, but it is clear that both Kefka and another Final Fantasy villain, Sephiroth, have other plans than merely listening to Chaos. Kefka also begins praising himself for his victory, goading Chaos to accomplish a similar feat. Though Chaos tries to destroy the demon, Yami, he fails. Kefka delights in Chaos's defeat, but slinks away once Chaos reforms as Feral Chaos.

A Match Made in Hell

Kefka transports himself to Haven City later in the war, discovering the Joker held up by Count Veger. Kefka, seeing in Joker a kindred spirit of psychosis and sadism, personally oblierates Veger. Joker, delighted at this new development, proposes an alliance, to which Kefka immediately accepts. The two work together, releasing various madmen inside Arkham Asylum. One of these men, Psycho Mantis, fails to initially impress Kefka, but wins him over through some remarkable displays of psychokinesis. In a true test, Kefka sends Mantis into outer space to destroy the computer program, SHODAN. Mantis succeeds, and Kefka brings him back to Earth. Kefka also witnesses Joker's freeing Sweet Tooth.

When Officer Tenpenny arrives in Haven City with the intent of taking it over, Kefka sneaks up behind him. He then unleashes Sweet Tooth, who makes quick work of the enemy cop. Kefka presents Sweet Tooth's victory to the Joker, to the Joker's delight. No sooner does this occur than does Fritz arrive in the alliance's midst. The monstrous hunchback informs the faction of Dreamland's growing power. Kefka immediately urges the Joker to embark upon some conquest, one that he is all too willing to embark upon.

During the assault upon Dreamland, Kefka plays an invaluable role in eliminatnig Dedede's airborne troopers. One blast of magic manages to wipe them all out. Kefka then pursues Nightmare, the leader of the Dreamland Alliance and the most powerful opponent. None of Kefka's magic attacks appear to do anything, until Kefka forces Nightmare into the second dimension. There, Kefka is able to deal a mortal blow to his enemy. With Nightmare defeated, Dreamland falls into the hands of the crazies. 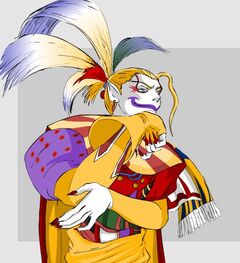 Kefka in the universe animated version 2, goes in this video: http://www.youtube.com/watch?v=O_6n33OJLvU 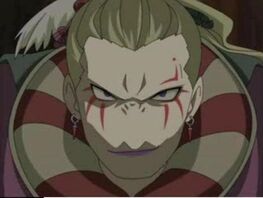 Kefka in the universe animated
Add a photo to this gallery
Retrieved from "https://villainstournament.fandom.com/wiki/Kefka?oldid=86289"
Community content is available under CC-BY-SA unless otherwise noted.