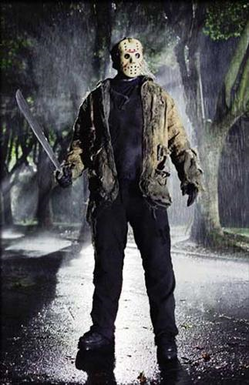 Jason Voorhees is the primary villain of the Friday the 13th horror franchise. The demonic reincarnation of a child drowned at a summer camp, Jason is unstoppable, emotionless, and homicidal; his only fear is water. He is a staple of horror iconography. In the second Disney Vs Non Disney Villains War, he is a minor player.

Pinhead introduces Jason to his alliance, much to Zorgs horror after killing Count Olaf. Summoning Jason from one of his demonic needles, Pinhead sends Jason against another undead warrior, Captain Barbossa. When Jason confronts Barbossa, the Captain reveals that he too, shares the near invulnerable powers that Jason possesses. Jason's attacks have no affect and Barbossa shoots him. Jason and Barbossa battle, with niether being able to kill the other. Barbossa drops an overhead tank atop Jason, but Jason endures, much to Barbossa's dismay.  Until finally, Barbossa learns that Jason's weakness is water as the nearby pipes rupture. He uses this against Jason, causing him to become afraid. Barbossa then electryfies the water by shooting a nearby pannel,  defeating him.

The undead slasher Jason Voorhees rose from the grave once more, and, after donning his signature hockey mask, he set out into the forest to hunt. After wandering for some time, Jason came across the cannibalistic serial killer, Leatherface. The two began to fight, Jason wielding his machete and Leatherface armed with a chainsaw. The battle was vicious, but Jason eventually won out, butchering Leatherface.

Charles Lee Ray, who has been reincarnated in the doll Chucky, joins Freddy’s group, ready for vengeance.

Him has survived the attack of Hades,he summons his old bodyguard,Jason to find more allies.