The Guard Armor is a Emblem Heartless, serving as a boss enemy in the video game installment, Kingdom Hearts. A metal robot-Heartless, with limbless gauntlets, feet, and torso, operating on their own sometimes, the Guard Armor has also an alternative form, called the Opposite Armor. The Guard Armor plays a minor role in the villains tournaments.

The Guard Armor is summoned by the darkness of Frollo, that corrupts him deeply, when he is faced off with General Tesler. However, the Armor fails, due to Tesler's quick fight techniques, much to Frollo's fury.

The Guard Armor is called by Pete to defend himself from Metal Sonic. However, before the Heartless would attack the creature, Metal Sonic blasts a massive amount of energy at the Armor, killing the Heartless.

When Wario challenges Pete into a combat, the bully-cat summons the Guard Armor Heartless to assist him in the battle. However, before he could attack, the Heartless is struck down by a massive blast of energy of Wario's weapon. 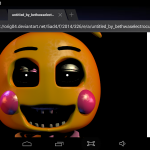