Start a Wiki
The Gods of Olympus are supreme mythical beings, who can create and control all kinds of magic. In Greek Mythology, the gods, also called the Olympians, were the principal gods of the Greek pantheon, residing atop Mount Olympus, a place where is forbidden for mortals to enter. The Gods appear as minor protagonists in the first video game of God of War, only to be turned as main antagonists in the next games. The Gods appear as major players in Animated vs. Video Game Villains War.

The Gods/Demi-Gods (According to the God of War Universe)

In the beginnings of the first war, a new god from another universe travels to the CGI Universe. Turns out that it was the animated version of Hades, who explores this universe, starting by Rhodes, a location in Greece. Seeing him as a dangerous threat, Zeus, in his eagle form, brings the Colossus of Rhodes to life and sends him to kill the god. However, the Colossus was easily wiped out by Hades's powers. Zeus then takes his real form to challenge him. With a swing from the Blade of the Gods, Zeus blasts Hades into an unknown location.

The Death of Athena And the Betrayal of Ares

However, things turned sour fro the gods of Olympus, as Hades plans his revenge by taking out Athena, the Goddess of Wisdom. When Athena confronts Hades, she demands to leave Greece and Mount Olympus at once. A furious Hades lights up and kill the goddess in his fury. This action was witnessed by Zeus, who swore revenge at Hades, for killing his daughter. Before Hades was about to attack Zeus, the king of the gods flee back to Mount Olympus. Soon enough, word has spread around Greece about Athena's murder by Hades, and the new was heard by the original God of War, Ares, who joins forces with Hades, since his old rival and half-sister, Athena, is pressumed dead and the fact that he was tired of his father rule on Mount Olympus and wanted a way to get rid of Zeus once and for all.

A Star Pass Away

Later, Hades and Ares enlists Ursula to their alliance, by bringing her to the CGI universe, after her defeat in her own universe. Later, Ares informs Hades about a mysterious powerfull object, called "Pandora's Box", that it would help them in their way to weaken the Olympian Gods. However, the Box was guarded by Zeus's son, Hercules. At first Hades demands from Hercules to leave them, opening the Box for themselves. Hercules refused and summoned a Phoenix from another universe to kill the trio. With Ares, transforming into a powerful beast, dealing with the Phoenix, Hades and Ursula challenge the demi-god. Soon enough, Hercules was at the mercy of both Hades and Ursula. Just as the sea witch weaken the hero's power, Hades took the opportunity to destroy the ground below Hercules, sending the demi-god to his pressumed demise. Ursula then reverts Ares into his normal form, after defeating the Phoenix. The trio then open the box and aquire equipment from the box. Just as then, Zeus arrives at the scene, only to be too late to see Hercules dead, his son, Ares, becoming a traitor against him, and the "Pandora's Box" at the hands of their enemies. Zeus then tried to finish off his enemies, only that Hades's forces disappear before he would act.

Preparations for the Final Attack

Seeing an ambush as inevitable, Zeus rallies up his fellow gods, including Poseidon, Hermes, Helios and the CGI version of Hades, on Mount Olympus to take down Hades. On the other side, Hades and his allies equip the last remaint powers of the "Pandora's Box", as it brought to them a bunch of Titans, able to challenge the gods. Hades then gathers his forces to lay seige to Mount Olympus. 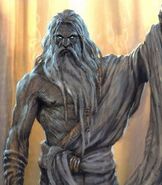 Zeus (The King of the Gods, Ruler of Mt. Olympus, and God of Lightning)

Hades (God of the Underworld)

Poseidon (God of the Seas)

Athena (Goddess of Wisdom and War)

Ares (The Original God of War)

Helios (Titan and God of the Sun, and Guardian of the Oaths)

Persephone (Daughter of Demeter, Wife and Consort of Hades, Queen of the Underworld)
Add a photo to this gallery

Hercules (Son and Demi-god of Zeus)
Add a photo to this gallery
Retrieved from "https://villainstournament.fandom.com/wiki/Gods_of_Olympus_(God_of_War)?oldid=79159"
Community content is available under CC-BY-SA unless otherwise noted.