The Goblin Alliance is the faction consisting goblins and trolls. The alliance plays a significant role in the villains wars, usually with, Prince Froglip and Queen Gnorga, being the leaders of the faction.

Prince Froglip made his announcement to his goblin army about his next motivations into the world above them, something that his ally Queen Gnorga, was very interested on his plan. To put their plan into action, Prince Froglip starts his invasion by attacking the castle of the loneless king, King Haggard. Although, the king was able to dispatch several goblins of Froglip, Prince Froglip pushes Haggard from a tower to his apparent demise, much to the excitement of the goblins for their first success.

Later, Prince Froglip and Queen Gnorga set their motives to Wonderland. However, they were confronted by their leaders, the Wizard of Wonderland, Nicholas Cherrywood and the Spirit of the Book. The spirit casts a spell to the goblin prince, something that Froglip didn't stand for. The Wizard then steps in to finish them, but Froglip and Gnorga easily knocked him down with their powers. Gnorga then used her magic to force Nicholas, the Book's master, to close the book and end the spirit's life for ever. After the spirit's defeat, the Wizard of Wonderland attempts to flee from Wonderland. Despite, his efforts, he was confronted by Gnorga. At her sight, the Wizard melts away into nothingness. Prince Froglip and Queen Gnorga then celebrate for their victory against their enemies.

From Rise To Fall

Later, King One-Eye, having heard of their recent victories, recruits the goblin alliance to his growing army against Egypt. Unfortunately the Goblin Alliance comes to an end, when Ruber and Eris arrive to annihalate the empire of the One-Eyes. After King One-Eye's and Zigzazg's defeat, Froglip and Gnorga take their matters into their own hands and begin their attack at their enemies. Froglip met his end, when Eris, transformed into an evil version of Sinbad, knocked him from a cliff to his demise. Gnorga, then, rushed off, after her partner's defeat and challenge the goddess. However, Eris turned her into rosebush and later used her dark magic to summon a tornado, sucking Gnorga in it to unknown parts of the world.

During the early events of the war, the goblin leaders, didn't meet at first. When the war was still in progress, Prince John, Froglip's master, heard a message about other foes who want to join his faction, consisting, the Queen of Hearts, Mad Madam Mim, Yzma and Queen Gnorga. Froglip, then, cooperates with the goblin queen to enpower his forces.

Under the Horned King's Services

Later, Prince John calls a message from Doctor Facilier, a sorcerer in assistance of the Horned King, suggesting to the faction an offer to join the Horned King's alliance. Prince John and his allies regret to his offer. When the Horned King learns that the Black Cauldron, the source of his dark power, was residing in King Stephan's castle, he orders his army to invade the castle at once.

When they arrived on the Horned King's castle, Froglip confronts, Prince Phillip, while Gnorga interacts with the Sultan of Agrabah. Both of them came victorious, as Gnorga easily captures the Sultan with her magic powers, and as Prince Froglip captrues Phillip with his goblin army. After the battle, Froglip and Gnorga take their new prisoners into the Horned King's castle.

Betrayal Among the Villains

Later, Froglip, wanting to scout the Horned King's territory, came across Snow White and her new friends. Froglip manages to frighten Gurgi, Stanley and Snow White and sends them into a forest. The dwarves, however were not scared about Froglip's goblin army and instantly they attack at the trolls. While they manage to defeat some of the goblins, the dwarves were blowed away by the Goblin King's strong sniffle. This action, however was backfired, when Sneasy, one of the seven dwarves, blowen the goblins away. Meanwhile, Humbert, the Evil Queen's Huntsman, was waiting for Snow White to kill her upon orders by Grimhilde. However, to Froglip's surprise, Humbert didn't kill her but instead he gave her a chance to run away from the Evil Queen's forces, while Humbert, leaving away. This action was witnessed by Froglip, who immediately rushes to the Horned King's domain and reports of Humber's quit from the Evil Queen's services. The Horned King then travels to the Evil Queen's castle and explains to Queen Grimhilde about her huntsman's quit from her services. Much to her frustration.

The Horned King makes clear to his allies to scout his terrain so no one would pass his territory again. Later, Maleficent arrives on the Horned King's castle and proposes to the Horned King's forces an alliance with her and her forces so that they will take down all the heroes. All of the Horned King's members agreed to her offer and prepare themselves into the upcoming battle.

Beating Down the Heroes

Again, the Goblin Alliance was consisted by Prince Froglip and Queen Gnorga. During the events of the war, Froglip and his goblin army capture the troll, Stanley, thinking of him as a threat to their kingdom. When Froglip brought before Gnorga, Stanley, the Queen decides to banish the hero, using her magic, into the Central Park, where the circus of Professor Screweyes was showing.

Prince Froglip (Prince of the Goblins, and Partner of Queen Gnorga)

Queen Gnorga (Partner of Prince Froglip, and Queen of Trolls)

Goblin King (Father of Prince Froglip, Husband of the Goblin Queen, and Second Commander to the Goblins)

Goblin Queen (Mother of Prince Froglip, Wife of the Goblin King, and Second Commander to the Goblins) 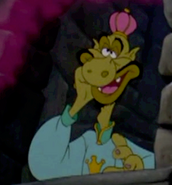 King Llort (Mate of Queen Gnorga and King of Trolls)