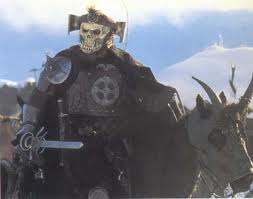 General Kael is the chief general of Queen Bavmorda and is the secondary antagonist of the fantasy film, Willow. He is a secondary player in the second Disney Vs Non Disney Villains War.

Searching for the Child

A child is prophesied to end the reign of Bavmorda; seeking to alter these events, Bavmorda sends out Kael to find the child and bring him to her. Kael has no luck and ends up excoriated by his queen. Nonetheless, Kael has suspicions the child is hiding somewhere in Jadis's alliance. He thus sends Xayide to defeat Princess Mombi, Jadis's weakest link, in hopes of getting information. Xayide goes a step further; she actually steals Mombi's head.

After some torture, Mombi reveals the location of Kal, the prophesied child, to Bavmorda's forces. The queen prepares a ritual so to kill the child and drain his powers. However, the Morganian forces arrrive with Kal, ready to defeat Bavmorda. Kael readies a frontal assault, but he and his men are soon overwhelmed. As Bavmorda and her other lieutenants perish, Kael makes his escape, the only member of his faction to survive.

With his master disposed off, Kael makes his way to Narnia and offers an alliance with it's current king, Miraz. During his arrival, Kael watches briefly, as Miraz tortures an orc minion, in the services of Sauron. When Miraz gets aided by Rumpelstiltskin, he sets off to the Enchanted Forest, by orders of the psychopath dealer, to fight off the remain living forces of Sauron. Kael has bit role in the battle, as he only leads his soldiers to the fight. Till' the end of the battle, Miraz perished and the Orc Armies of Sauron got defeated by the armies of Tywin Lannister. By the end of the battle, Kael joins forces with Miraz's ally, Cutler Beckett, and with Tywin Lannister.

Retrieved from "https://villainstournament.fandom.com/wiki/General_Kael?oldid=76357"
Community content is available under CC-BY-SA unless otherwise noted.